'This Is Us': How NBC Drama Wrapped The Pearsons' Story After Six Seasons; Dan Fogelman Breaks Down Series Finale; Stars React To End
Read the full story
March 17, 2021 3:15pm 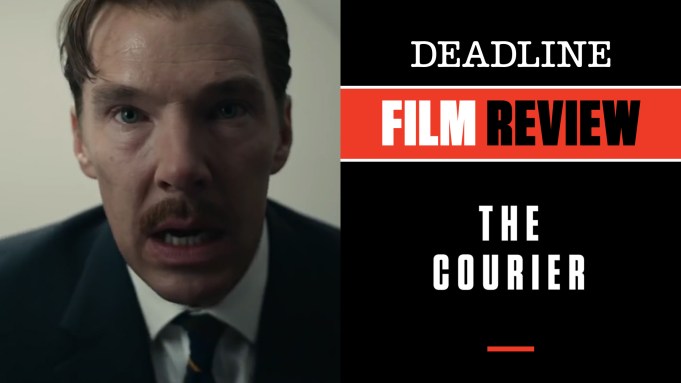 The Courier is a new Cold War spy story not exactly ripped from the headlines, as it pretty much has been flying under the radar for the past 60 years or so since the events of director Dominic Cooke’s riveting film took place. In style and substance it is safe to say this is not the stuff of James Bond, but feels closer in tone and execution to more serious efforts in the genre released near the time of the early to mid-1960s when the heart of this tale actually happened — films like Richard Burton’s The Spy Who Came In From the Cold or Michael Caine in The Ipcress File. It is pure LeCarré without ever being written by the late great master, but Cooke and his screenwriter Tom O’Connor are smart enough to take a true story and make this a memorable piece about two men caught up in world-shattering events without really knowing just how integral their actions would come to literally saving the world from destruction.

In today’s cinematic universe there would be so much more derring-do attached to a premise like this, perhaps only a job for Dwayne Johnson or the Bond of Daniel Craig. But here we get a mild-mannered Benedict Cumberbatch in a role he fits like a glove as a simple British businessman called upon to do nothing more than take us from the brink of nuclear destruction.

The backdrop here is the placement of Russian nuclear missiles in America’s backyard on the island of Cuba in 1962. Cumberbatch is a world-travelling British businessman named Greville Wynne, who finds himself remarkably called into service by the Brit’s MI6 and CIA in order to connect with a Russian man named Oleg Penkovsky (Merab Ninidze), who is fearful that “hothead” Soviet Union leader Nikita Khrushchev cannot be trusted with his finger on the button and must be stopped, especially with the evidence that, by his status in the government, Penkovsky is privy to, about the missiles in Cuba.

Working covertly with Wynne, a man enlisted without really knowing the extent of what anyone else might call the job of a spy, the pair play a dangerous game in making the existence of the missiles in Cuba known to the American government and, of course, to President Kennedy. Over the course of this assignment the two become oddly close and that is what is at the heart of this tale, guaranteed to keep you on edge throughout, even though we know their efforts would prove successful, and the world would be saved once Khrushchev blinked and the so-called Cuban Missile Crisis eased after 13 tense days in October. This is the story of what led up to that, as well as what happened afterwards to these two men who put their lives on the line in crucial ways.

We also get the personal side of each, with Jessie Buckley nicely playing Wynne’s wife Sheila, as well as a glimpse into Penkovsky’s family life offering uniquely human touches not often seen in this kind of film. Also excellent is Rachel Brosnahan, playing a CIA operative instrumental in bringing them together. Her no-nonsense character, Emily, is a composite of other CIA figures in the actual story, but it is significant that Cooke and O’Connor decided to make a woman central to all this, something at the time that didn’t really happen perhaps on this high a level but here makes perfect sense, using a little dramatic liberty to add a spotlight on the efforts of women in various positions during this time that movies rarely tackled.

Cooke has layered on a visual look to the film that darts between Britain and Moscow and feels so right, and emulates more sober spy movies of the actual period. Interestingly he decided to cast an actor (Vladimir Chuprikov) as Khrushchev, however briefly figuring on screen, but uses newsreel footage from the time for JFK. It all works. And since the challenge was to tell a story that took place covertly and only was retold, somewhat unreliably, in a couple of books Wynne later wrote, in order to make some money after his life became a shambles in later years, O’Connor’s exemplary work in piecing it all together with classified information was invaluable. Cumberbatch is ideally cast here, in one of his finest screen outings, and he is matched by a superb turn from Ninidze, who makes Penkovsky a fully fleshed-out human being, far from the usual movie takes on Russian officials during this time.

Cooke, formerly artistic director of the Royal Court Theatre, previously made an intriguing feature directorial debut with 2017’s fine On Chesil Beach. He has found some extraordinary material here for this second effort and it is well worth checking out. Producers are Adam Ackland, Rory Aitken, Ben Browning and Ben Pugh. Roadside Attractions and Lionsgate release the film Friday.

Check out my video review above with scenes from The Courier, a generic-sounding title that proves to be just right once you see it — and I hope you will. Let us know what you think.