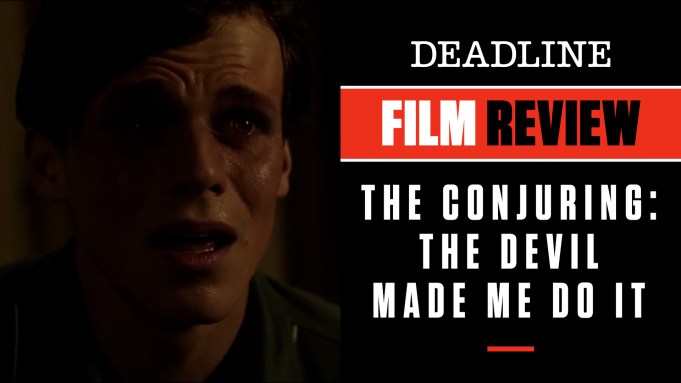 When you have a horror film series that keeps the cash flowing to the tune of $1.8 billion and counting, you just keep the new installments coming. Despite delays due to the pandemic, New Line Cinema and Warner Bros are tackling the continuing tales of paranormal investigators Ed and Lorraine Warren in the seventh entry under the umbrella Conjuring label that has sported two previous Conjuring movies, The Nun and three more with scary doll Annabelle.

The Warrens are the main attractions of the directly named Conjuring flicks, all based on case studies the real life-couple worked on, most notoriously in the “haunted house” realm such as their infamous contributions to the legend of The Amityville Horror. However, instead of going back to the same old well, this time the filmmakers — including producer/co-writer James Wan, who came up with the story for this one with screenwriter David Leslie Johnson McGoldrick (The Conjuring 2) and who directed the first two editions that starred Patrick Wilson and Vera Farmiga — are turning to perhaps their darkest case ever and to the world of exorcisms.

Whenever you drift into this particular territory, you can bet on comparisons to the unquestioned king of the pack, William Friedkin’s classic 1973 chiller The Exorcist. Despite being inspired directly by a fascinating true story, The Conjuring: The Devil Made Me Do It isn’t in the same league as that Oscar-winning film, but it still packs a punch as it centers on the first U.S. murder trial in which a defendant used demonic possession as a legal defense. Although director Michael Chaves (The Curse of La Llorona) uses the real case of Arne Cheyenne Johnson (Ruairi O’Connor), there is some dramatic liberty taken and certain incidents moved around in order to please fans of this genre, but still it will get your blood boiling.

Chaves chooses to open his film where most in the genre would close it — with a rip-roaring exorcism at full speed. It is, in fact, the final exorcism of young David Glatzel (Julian Hilliard), an event in which the boyfriend (Johnson) of Glatzel’s sister Debbie (Sarah Catherine Hook) is part of the goings-on along with the Glatzel parents too. At one point, Johnson does a no-no and speaks directly to the demon, and though the exorcism is successful in ridding David of his possession, the demon skips into Johnson, who is deeply afflicted as time goes on, having frightening visions and eventually being driven to brutally knife his landlord/friend to death. Did he do it on his own, or was it the devil who made him do it?  That is the question at the core of this film, the actual case was known as the Brookfield Demon Murder case.

The Warrens also were part of that exorcism and, as this film puts it, Ed suffered a heart attack because of the intensity (in real life, Ed Warren did have a heart attack during an exorcism, but it was a different case). Lorraine Warren’s considerable psychic abilities are on full display in this one as Johnson’s case becomes a cause célèbre. You might choose to be skeptical about all of this, but the filmmakers make a convincing case, and they were aided with the opportunity to talk to the people who were at the center of it all those decades ago.

The film had my attention throughout, and I guess why I like both previous Conjuring movies is for the superb chemistry between Wilson and Farmiga, as well as the fact that the genuine horror come right out of case files and stuff that happened. It gives it added gravitas, and The Devil Made Me Do It continues a proud tradition, though I still think The Conjuring 2 rules this particular cinematic universe. O’Connor is excellent as Arne Johnson, and there is fine supporting work also from the Warren’s nemesis known as The Occultist (Eugenie Bondurant) as well as John Noble as Father Kastner, particularly in a scene set in his artifact room for a change –a wink-wink at the signature artifact rooms that are part of this franchise.

Producers are Peter Safran and Wan. Warner Bros opens it Friday in theaters and, for the first month of release, on HBO Max too. Check out my video review with scenes from the film at the link above.

Do you plan to see The Conjuring: The Devil Made Me Do It? Let us know what you think.