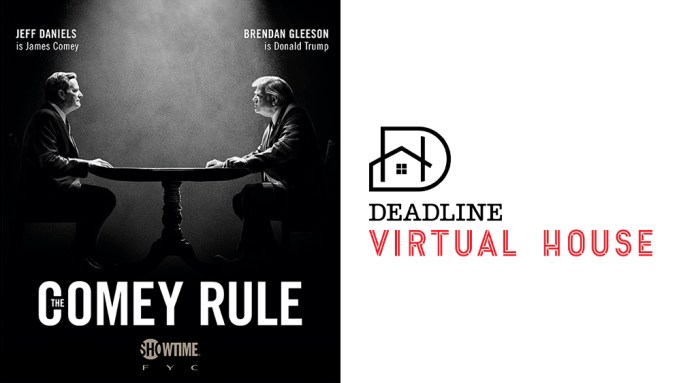 “We always thought of it as one movie — it was just going to be a three-and-a-half-hour movie,” director Billy Ray admits of Showtime’s limited series The Comey Rule. “To be honest the structure that we stole was …Jaws,” he added of the political drama based on fired FBI boss James Comey’s memoir A Higher Loyalty.

“I felt very very strongly that we go as long as possible without seeing the shark,” the director asserted in our Deadline Virtual House panel last night – as you can see in the video above.

Headlined by Jeff Daniels as Comey and Brendan Gleeson as Donald Trump (aka the shark), two-parter The Comey Rule debuted on the ViacomCBS-owned premium cabler September 27 and concluded the following night.

At one point bizarrely slated to air after the November election, the miniseries also starring Holly Hunter, Scoot McNairy and Michael Kelly pulled back the veil on the rot early on in the former Celebrity Apprentice host’s brazenly corrupt administration. In that vein, The Comey Rule is a study in the early drafts of history, realpolitik and what happens when a good man finds himself in a bad place.

Which is why I said in my review of September 1: “Coming after years of convoluted and compromised probes like the Mueller Report and the failed impeachment, The Comey Rule may prove to be the most important drama in a year that clearly has had no shortage of drama, on almost any level.”

And there was no shortage of drama, delight and depth in our trio of Comey Rule panels on Wednesday.

Kicking off the trifecta of talent, we had “On the Set” with producer designer Christopher Brown, hair stylist department head Michelle Cote and make-up department head Craig-Ryan French join us remotely from all over the continent. Then we went “Behind The Camera” with Elliot Davis, director of photography, editor Jeffrey Ford and composer Henry Jackman.

Last but not least, the closers for our Comey Rule evening were Ray, Daniels and Gleeson with the director in California, the Newsroom alum in Michigan and the Harry Potter vet in Ireland.

Like The Comey Rule itself, the evening was an event. So, take a look and, while you are at it, take a moment to be thankful for the endurance of our democracy.