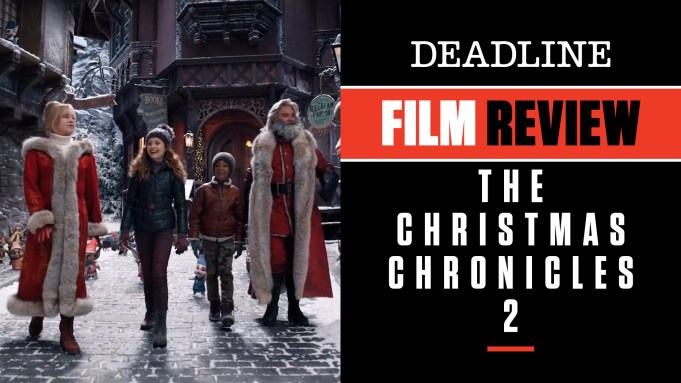 It has been 34 years — since their last co-starring teaming in 1987’s comedy Overboard — that Kurt Russell and Goldie Hawn, longtime partners in real life, have led a movie together. The occasion here is the sequel to Netflix’s 2018 holiday attraction The Christmas Chronicles. Actually in that one Hawn did appear in a quick cameo toward the end that set up the reunion for this follow-up, in which her character Mrs. Claus is given a much heftier presence opposite Russell’s jovial interpretation of Santa Claus. Also marking an increased participation this time around is Chris Columbus, who produced the first one but here has taken on directorial and co-writing (with Matt Lieberman) reins as well. The director of such big-scale family movies as the first two Harry Potter films, both Home Alones and Mrs. Doubtfire among many others is right in his wheelhouse in this special effects-heavy fantasy.

Also returning are the actors who made up the Pierce family, including Darby Camp as Kate and Judah Lewis as Teddy. Both are now teens with their own hang-ups, and the latter is given far less to do as the focus zeroes in on Kate, upset about the loss of her father Doug (Hawn’s son Oliver Hudson in the first film) and now on a Christmas-season vacation in Cancun with Mom (Kimberly Williams-Paisley), Teddy, mom’s new boyfriend (Tyrese Gibson) and his young son Jack (Jahzir Bruno). She in fact is so down about the whole thing she is overheard plotting to run away by the mysterious hotel “staffer” Belsnickel (Julian Dennison).

Turns out that is all this guy needs to hear. Belsnickel is actually a human-hating elf in disguise who has a plot to destroy the North Pole and needs to put his evil deed into motion. He comes up with a scheme to entice family members to different resort activities while driving Kate and Jack on their own “excursion,” which turns into a head-spinning fantastical trip beyond the Aurora Borealis to the magical Santa’s Village and, for Kate at least, an unexpected reunion with Santa and his elves. In the original, she and Teddy had plotted to abduct Santa on Christmas Eve but instead got recruited to help him save the holiday instead. Now it is she and Jack who find themselves in action, eventually to fight back against Belsnickel, who has captured the immortal “Christmas Star” with which he can wreak total havoc on the North Pole.

Along the way there are several nice moments with the Claus couple, the elves and reindeer (including a near-death encounter for Dasher), and an excuse for a rousing mid-film airport lounge sequence in which Darlene Love, singer of the classic “Christmas Baby (Please Come Home),” as an airline clerk trying to appease unhappy stranded customers, is engaged by Santa, complete with choir in a full-court song-and-dance original tune from Steven Van Zant called “The Spirit of Christmas.” Busby Berkeley would be proud. As movie song numbers go you could definitely imagine this one being performed at the Oscars, with Russell and Love really socking this one home in the film. Musically there are also sweet moments with the Pierce family singing “O Tannenbaum” that adds a lower-key sweet touch.

Russell fits this role like a glove which is probably why he wanted to revisit it (he is also a producer), and rather than yukking it up Hawn instead adds some nice warmth and authority as Mrs. Claus. There is even a poignant note added about the lack of any kids of their own as the couple wistfully watches children play in one scene. Seeing Russell and Hawn together on screen again after all this time is a holiday treat. Camp nicely reprises her role, now as a troubled teen, and Bruno adds the required cuteness. Dennison shows he is not pure evil, with a backstory as a young elf explaining how he got this way, and is a refreshingly different villain. Noted mostly for his great turn as a young actor in Taika Waititi’s wonderful 2016 The Hunt For the Wilderpeople, he is now 18 and looks to be growing into a promising career beyond playing kids.

In addition to the human stars, Jon Hutman’s production design is a star unto itself with a gorgeous vision of what Santa’s Village might look like at this point in his existence.

Check out my video review above with scenes from the film. Do you plan to see The Christmas Chronicles 2? Let us know what you think.