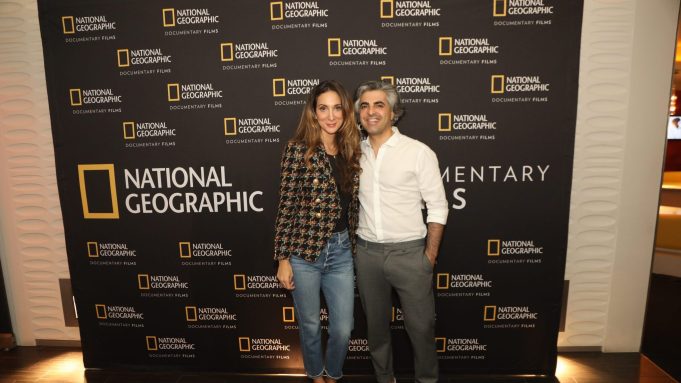 The first Syrian director to be nominated for an Oscar, who made a huge impression with his 2017 film Last Men in Aleppo, Feras Fayyad has spent most of his career as a filmmaker documenting the horrors of the Syrian Civil War, and the heroism of those helping others to survive it—doing so most recently with his latest doc, The Cave.

Shedding light on the daily trials of female doctors working in an underground hospital known as The Cave, Fayyad’s doc finds its focus in Dr. Amani Ballour, a physician who saved the lives of countless men, women and children in recent years, even as bombs dropped overhead, killing four of her colleagues, and The Cave was hit with terrifying chemical attacks.

Speaking on a panel last night at the Pacific Design Center, the director explained that the key to connecting with his heroic documentary subject was his own upbringing, in a family filled with women. “I grew up [with] seven sisters, fourteen aunts. I’m very proud about this, and they shaped me, personally. I learned and heard so [many] stories from them when I was growing up. My mom…was a teacher, and she [kept teaching] even [when] she was fired from her job, because she was Kurdish and also a woman,” Fayyad shared. “I told [my] story [to] Dr. Amani when I first connected with her, and she directly felt like, ‘Yes, you can tell this story. You can document this, in this way.’”

The other condition was that the director’s team had to treat Dr. Amani with respect. Encountering the sexism of her patriarchal society even as she was saving the lives of the helpless, Dr. Amani initially took issue with Fayyad’s cinematographers, as well. Culturally conditioned to keep the camera away from women, the DPs needed to overcome their own ingrained biases if they wanted to participate in the project. “This is her city, this is where she grew up. She left behind her father and mother, her family,” Fayyad told them. “[She] left behind everything, even her [studies], to do this job.”

Joining Fayyad on the panel was Amel Najjar, the Executive Director and Founder of the Children of War foundation, who has dedicated her life to healing children affected by war, connecting them with a global team of healthcare professionals. In conversation with Fayyad, Najjar addressed the power of media coverage and films like The Cave, in their ability to drive funding to those who need it the most. “I think the important message is that movies like The Cave, and what we do, in terms of shedding light on what’s happening, really does, at the end of the day, dictate if someone is able to receive care,” Najjar said, “whether it’s health care, or education, or even water.”

Toward the night’s end, both Fayyad and Najjar reflected on the change they’re hoping to see in the world, and what needs to happen to make it possible. “I think it’s acknowledging [what’s happening in the Middle East] and doing something about it—not just talking about it, but action, right?” Najjar said. “ Getting out there and getting involved, regardless of which form [of action] it is.”

As someone who was jailed for 18 months by the Syrian regime, and tortured throughout this time, Fayyad is actively pursuing change in his own way. “I’ve been suing the person who tortured me in the jail for the last year. He [was] captured in Germany, and just yesterday, I heard there [are] like 44,000 cases being charged against him [for] torture,” the director revealed. “This is one branch of the intelligence service; in Syria, there [are] more than 16 [branches] in every city. So, just imagine [the] number of people that disappear.”

As far as sweeping change in Syria, he explained, one thing is most important of all. “If [President Bashar al-Assad] is removed from authority,” he said, “this is the most important thing happening for Syria.”

To hear more from our conversation with Najjar and the director of The Cave, click on the video above.