Continue to Deadline SKIP AD
You will be redirected back to your article in seconds
Skip to main content
February 18, 2020 4:22pm
6Comments 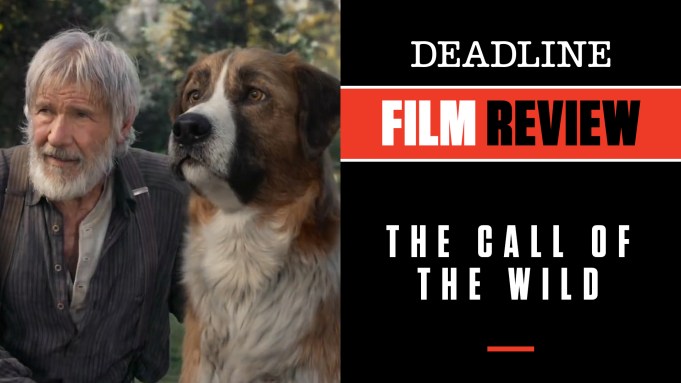 Jack London’s classic adventure The Call of the Wild was first published in 1903 and has been a staple of young readers ever since. There have also been several movies made from the story of Buck, the St. Bernard/Scotch Collie, and his journey to his forever home in the open wild. From silent movies to star-driven vehicles, they always featured real animal actors and a star dog in the lead. Not this time.

In a move that will certainly please PETA animal activists, the star pooch who plays Buck here is not a real dog at all, but rather a computerized one whose movements were the work of Terry Notary, a Cirque du Soleil performer who delivers a motion-capture performance a la what Andy Serkis has done over the course of several movies including as Caesar in the Planet of the Apes films. PETA has long complained about animals being put through dangerous paces in the making of various films, but it certainly has nothing to complain about here, though perhaps purists will see this as a rather synthetic telling of the tale that lacks the authenticity a real-life, breathing canine could bring. This has more in common with recent Disney-fied live-action remakes like The Lion King, where the photo-realistic renderings of animals is so striking they seem real. In this case, your acceptance of the very effective work of these visual effects wizards is key to enjoying not only the antics of Buck, but also numerous other creatures depicted on this dog’s journey.

The movie itself takes various liberties with London’s original tale and the action has been ratcheted up considerably by writer Michael Green  and director Chris Sanders, who is making his live-action debut after working on various animated films like The Croods and How to Train Your Dragon. Clearly he is comfortable with inanimate character work. The various stunts and scenes written for Buck would make it difficult to believe a real dog could pull it all off, even a stunt dog. Buck outruns avalanches, dives through frozen ice underwater to save a young woman, rides treacherous rapids, gets into a fierce and intense fight with a wolf, and leads a team of CGI sled dogs into dangerous environs. And that is just some of it.

I wasn’t sure at first if I was watching the real thing or a special effect, but I surmised it had to be CGI, and indeed it was. After a while I was fine with it, and rather enjoyed traveling with Buck on his adventures, as I think kids and family audiences are also likely to as well. Much of that reason is the casting of Harrison Ford as prospector John Thornton, who befriends Buck and later becomes his human partner. Ford grounds this film in reality as only a real star can do and brings a quiet dignity to the role of a man who has turned to the bottle after losing his son, and soon after his wife and life as he knew it. In a cutesy bit that would strain the patience even of Lassie and Rin Tin Tin in their heydays, Buck also acts as sort of a one-dog AA meeting every time John pulls out the whiskey. In fact, there is lots of humor like that, but mostly perilous situations and ultimately real heart that makes this telling of the classic worth a visit.

In supporting roles, Bradley Whitford plays the first master of Buck, then completely domesticated and a friendly house pet until he is dognapped and sent on to unknown places. Omar Sy and Cara Gee play a nice couple who work with him as Buck leads their team of sled dogs delivering the mail. Every movie needs a villain, though, and this one has a one-dimensional guy named Hal, overplayed by the usually reliable Dan Stevens, who is determined to whip Buck into shape to lead him to the gold he so craves. Karen Gillan plays his equally soulless sister, and Colin Woodell her clueless husband.

Production values are first rate, the locations stunning, and the story still timeless no matter the technique used to tell it this time. Producers are Erwin Stoff and James Mangold. This looks like a Disney film, so appropriately it has come to them courtesy of the newly renamed 20th Century Studios. It releases Friday.

Check out my video review above with scenes from the movie. Do you plan to see The Call of the Wild? Let us know what you think.