Continue to Deadline SKIP AD
You will be redirected back to your article in seconds
Skip to main content
March 6, 2020 11:54am
1Comments 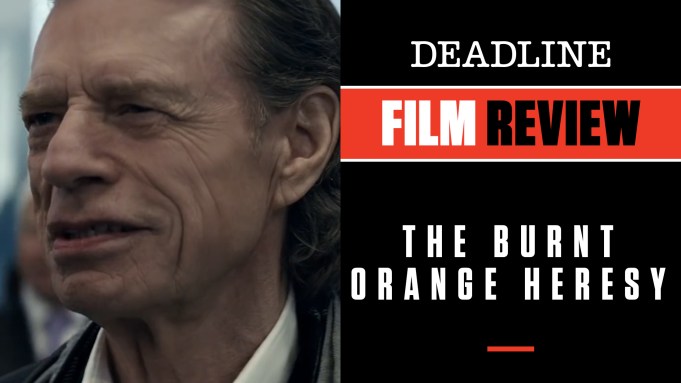 More than anything, The Burnt Orange Heresy is a throwback to the 1960s and ’70s kind of sexy, noirish, feverishly hot and sophisticated thrillers that mash up exotic European locales with a potent English-speaking cast. Watching it I realized I don’t see this kind of film nearly as much anymore, a smart adult indulgence once more common to world cinema. What was fun about this style of film is that they often took such wild swings they would crash and burn, or go on to become fondly remembered movies that may not have succeeded completely, but certainly were not cut in the mold of studio pictures turned out today.

This film, from Italian director Giuseppe Capotondi and writer Scott Smith (adapting Charles Willeford’s 1971 novel), doesn’t always get the tone right but still lands as a pretty entertaining couple of hours. That is thanks in large part to its international cast including Danish actor Claes Bang (The Square) and Elizabeth Debicki (Widows, The Night Manager), who steam up the screen in a series of uninhibited and graphic sex scenes that eventually turn very dark.

Set in the Milan and Lake Como areas of Italy, Bang plays James  Figueras, an art critic and frustrated artist himself who lectures on the meaning behind some of the world’s more intriguing paintings, even if he clearly selling a lot of bullsh*t. His fake fame is something he will hang on to at all costs. Attending one of those lectures is feisty and alluring American adventuress Berenice Hollis (Debicki), who hooks up with him and in no time flat winds up in his bed. Their scenes together are sizzling until the plot thickens and James is summoned to the mansion of a shady art collector named Joseph Cassidy (Mick Jagger), who reveals that living right in his midst happens to be Jerome Debney (Donald Sutherland), a brilliant, J.D. Salinger-type uber-reclusive artist  who has a habit of burning all his works or never letting them out. He believes that if James can steal one it would be worth millions, and thus the effort begins.

It isn’t as easy as it might be hoped to be and soon the film is taking a few unexpected twists and turns, as is the evolving relationship between James and Berenice. It wouldn’t be fair to reveal just where all this is heading as these four main characters intertwine, but suffice to say The Burnt Orange Heresy becomes something more in common with a ’40s-style film noir than the sleek and sexy enterprise we saw in the first half.  It is here that the balance and tone begins to escape Capotondi’s grasp a bit, and a couple of moments don’t quite add up in the credibility department. However, I was just so taken with the atmosphere and world into which the director invites us that I was willing to go with it at that point.

Bang is a very capable leading man, and if you ask me a prime candidate to be the next James Bond — see this film and you will immediately know what I mean. But it is Debicki who steals the acting honors. A completely believable and fresh screen presence, she is terrific in a role where she gets to run the gambit of emotions. Sutherland of course in a cinematic treasure and adds much here as usual. And it is always great to see Jagger on screen in one of his increasingly rare, if brief, film turns. It’s not necessarily a great immersion into character acting because let’s face it,  Jagger is Jagger, but he’s lots of fun to watch.

The Italian settings are luscious, and with the coronavirus sweeping that nation right now this is probably the closest we will be allowed to the wonders of  Italy for the moment. What more can you ask of a movie for smart-thinking adults? I say go!

Check out my video review above with scenes from the film. Do you plan to see The Burnt Orange Heresy? Let us know what you think.