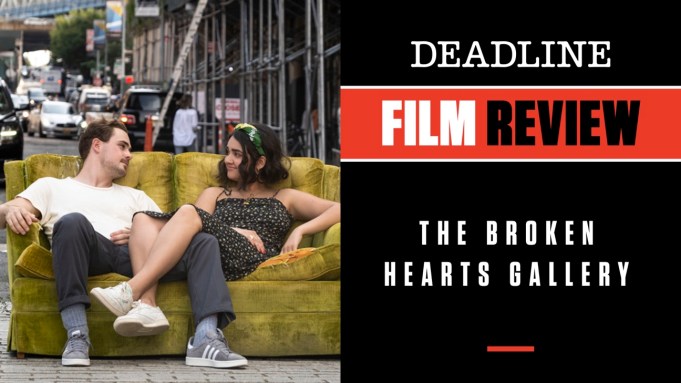 Following Tenet in an effort to revive movie theaters, Sony Pictures and its TriStar label are turning to the endangered romantic comedy formula to bring people back from the pandemic and into multiplexes, and especially in this case a targeted audience of Gen Y’ers who might see themselves and their past relationships in this sweetly predictable story about a young woman putting her broken love affairs on display for all to see.

In terms of theatrical play, rom-coms have been largely AWOL in recent times, the format relegated with far more success on Netflix rather than its glory days on the big screen. It is unlikely that The Broken Hearts Gallery, a feature writing-directing debut from TV scribe Natalie Krinsky, will lead the charge for the genre back into the good graces of theater owners hungering for the likes of Tenet and James Bond.

Australian actress Geraldine Viswanathan, so good in the recent HBO film Bad Education, leads a diverse cast and gets to sport her comedic chops as Lucy, an art gallery worker with a cozy sexual relationship with colleague Max (Utkarsh Ambudkar) that goes awry when his ex comes back into the picture and he is added to the long list of busted affairs she keeps close to memory by creating her own private gallery of trinkets and mementos. Some say she is a hoarder surrounded by all these reminders of her former love lives, but she has an idea to actually turn them into something useful by creating an art gallery-like exhibit where other like-minded, heartbroken, single twentysomethings (and anyone else) can put their own relics of relationships gone wrong on display.

She is helped in this cause when she meets, oh-so-cute in typical rom-com fashion by mistaking him for her Uber ride, a small-hotel owner named Nick (Dacre Montgomery) who soon offers up his lounge space for the budding enterprise that the two collaborate on. It doesn’t take a brain scientist to see where this might be leading, especially with clues that the low key and likeable Nick may have romantic entanglements of his own from which he needs to get, well, untangled.

This is the flimsy foundation on which Krinsky builds a near two-hour feature film that has all the hallmarks of the genre including the BFF’s for Lucy (Molly Gordon, Hamilton’s Phillipa Soo) and a sidekick for Nick (Arturo Castro). It isn’t a question of if this working relationship dealing in trinkets from a lovelorn past leads to something more intimate between Lucy and Nick, but only a matter of when — and then it gets, well, complicated.

In an intro to the preview link of the film sent to critics, executive producer Selena Gomez makes the case for the film as bringing some love and laughs into a world that needs it now more than ever. If The Broken Hearts Gallery accomplishes that then so be it. It’s forgettable fluff, but harmless. It lacks the edge of say an Amy Schumer vehicle like Trainwreck, though the sometimes-overachieving demeanor of Viswanathan reminded me of her. The actress tries too hard to make us love her, especially in the first half, but eventually turns Lucy into a three-dimensional person you find yourself rooting for by the end.

However, acting honors go to fellow Australian Montgomery (both leads sport nice American accents), who is a Zac Efron-type blissfully countering the more forceful performance from Viswanathan with an appealing charm and easygoing personality. Ambudkar is stuck with the third-wheel role common to rom-coms and does it efficiently. Bernadette Peters turns up as the art gallery owner where Lucy works and has a few bits of advice to offer. Suki Waterhouse is Chloe, Nick’s past “entanglement” and namesake as it turns out for his hotel. Krinsky drops in mockumentary-style interview segments with a variety of people explaining their own reasons for keeping souvenirs of their broken loves. The director also seems fond of montage sequences that will be familiar to fans of the genre.

Aimed squarely at the young single female audience who may relate, there isn’t much too chew on here, but I realized in watching it that I have been spending much of the pandemic going through the garage and rediscovering boxes of movie promo items I have accumulated over the years, remnants of my own past relationships with the movies, good and bad, that I hang on to just like Lucy does with her own need for nostalgia. It’s not likely I will be clinging to any memories of The Broken Hearts Gallery, but for those who succumb to these characters and their quirky charms, why not go for it?

The poducer is David Gross. Sony releases it next Friday, September 11.

Check out my video review above with scenes from the movie. Do you plan to see The Broken Hearts Gallery? Let us know what you think.