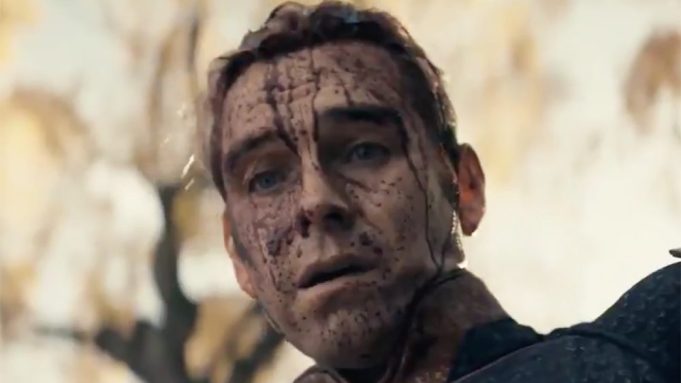 After being leaked online for a moment (Amazon promptly took it down), the first trailer for the second season of Eric Kripke’s The Boys officially premiered at CCXP in Sao Paulo during the Amazon Prime Video panel that featured series stars Erin Moriarty who plays Starlight; Karen Fukuhara who plays the Female; Jessie T. Usher who plays A Train and Antony Starr who plays Homelander.

The panel started with a live rock band introducing the actors and Starr coming out last like a rockstar, spraying the crowd with some sort of fire extinguisher smoke gun.

The cast talked about how it was like embodying their characters and reflecting on season one and trying not to spoil season two. After their superhero-talk, the crowd went crazy as they presented the new trailer which began with a bloody-faced Homelander flying in and looking at something with a look of warmth and concern. The blood is most likely from the end of last season when he bid an explosive (and a bit sad) farewell to Madelyn Stillwell (Elisabeth Shue).

From there, the trailer cuts to a handful of new footage including one with A Train on life support and another with Starlight in front of a crowd, soaking in paparazzi flashbulbs. We also get to see flashes of The Female, Giancarlo Esposito’s Mr. Edgar, Chace Crawford’s The Deep, Jack Quaid’s Hughie, Dominique McElligott’s Queen Maeve and finally, Karl Urban shooting guns and sipping tea as Billy Butcher. Then it just becomes a tapestry of blood, violence and R-rated fun — which is essentially on brand for The Boys. Noticeably absent from the teaser are new characters including Patton Oswalt’s mystery role as well as Goran Visnjic as Alistair Adana, Aya Cash as Stormfront and Claudia Doumit as Victoria Neuman.

The Boys is set to debut on a yet-to-be-announced date in 2020. It is co-produced by Amazon Studios and Sony Pictures Television Studios with Point Grey Pictures, Kripke Enterprises and Original Film.