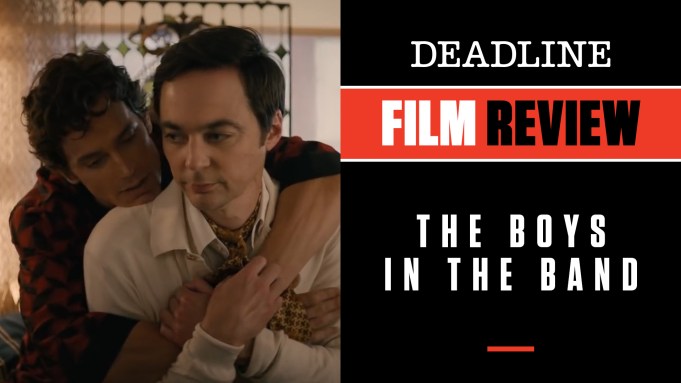 It seems The Boys in the Band might be making some sort of history exactly half a century since the original film version of Mart Crowley’s landmark play was released. For that film, directed by William Friedkin, the highly unusual casting move of bringing the entire Broadway cast to the screen version was a huge plus, and 50 years later it has happened again as producer Ryan Murphy and director Joe Mantello have assembled their 2018 Broadway revival cast to make an even better movie out of material that might look dated — and intentionally is in some ways — but takes on a new poignancy when viewed through the prism of 2020.

Not updating the 1968 setting of Crowley’s original, The Boys in the Band centers on a birthday party screenwriter Michael (Jim Parsons) is throwing for Harold (Zachary Quinto) and friends — one that turns from frothy lightness to dead seriousness as the night turns into a phone game of Truth or Dare when guests are asked to cold-call someone from their past and express their love in order to score points. The gathering gains further tension when a person from Michael’s own past, the married Alan (Brian Hutchison), unexpectedly crashes the proceedings.

The original play was considered a landmine for some actors and a breakthrough when it hit Off Broadway, then Broadway, and Friedkin’s film version was faithful, even if it seems dated, stereotyped and awkward when viewed without context today. The new Broadway revival and this very accomplished and entertaining new film for Netflix has a different feel, reminding me more of watching something like Edward Albee’s Who’s Afraid of Virginia Woolf? emphasizing the rapid pace of the acid wit and game-playing over the course of a devastating night, much more than I ever noticed when I saw Friedkin’s film. And there is a poignancy that comes through, keeping it from being a museum piece by knowing that AIDS would storm through this community several years later and change lives and attitudes forever.

It is ironic, and terribly sad, to note that five of the original cast members, their director and a producer all died from complications of AIDS themselves, making watching Friedkin’s film especially melancholic now. So seeing a new version so expertly filmed by Mantello becomes a new excuse to watch with fresh eyes a movie that also reminds me of Hollywood’s once-regular habit of bringing challenging and dynamic theater to the screen, opening it up just enough but keeping the experience of all that remarkable dialogue as a cinematic special effect all unto itself. Murphy clearly knows this and is smart enough to bring it again to the screen. He has the Netflix adaptation of The Prom coming later this year, and I hope he keeps mining the theater for more.

The dialogue, sometimes hilarious, that these actors get to say still holds up even if the self-loathing and confused sexuality of key characters is not in line with changing times that would come. Thus, The Boys in the Band remains a relic of its era but one that — for me, at least — still provides a completely different experience that what I saw the first time. It always helps to have a great cast, and this one, after working on the boards for three months honing the material, hardly could be better. Parsons is the oft-tortured ringmaster keeping it all together as a disparate group of friends runs through their own feelings associated with being gay pre-Stonewall, pre-AIDS and pre-marriage equality. They are all superb in straddling the difficulties of making these lives seem relevant without trying to perform surgery on Crowley’s deliciously biting text.

Parsons is excellent as the conflicted Michael, and things really start to pop when Quinto’s Harold arrives, the clipped speech and venomous wit intact and on target. Matt Bomer, Michael’s ex, is a sea of self-analysis, Andrew Ranells as Larry and Tuc Watkins as Hank might be recognizable to any couple — gay or straight. There also is fine work from Michael Benjamin Washington as Librarian Bernard, and Robin de Jesus, who plays his “friend” Emory without sailing over the top. The hustler who shows up as a birthday gift of sorts is played by Charlie Carver with just the right amount of sweet, clueless dumbness. Alan, the surprise visitor, is delivered in a nicely complex performance by Brian Hutchison.

Crowley, who died unexpectedly in March, was around to hone his play and ultimately had help from Ned Martel in the film adaptation. Sadly, he isn’t around to see the reception the latest film version will get when it launches September 30 on Netflix Coming from the streamer after this week’s unveiling of another superb all-male ensemble effort in Aaron Sorkin’s The Trial of the Chicago 7, it brings a host of acting highlights for the men in a year that hasn’t had much to crow about. Now it does. Joining Murphy and Mantello as producer is David Stone. Check out my video review with scenes from the film by clicking the link above.

Do you plan to see The Boys in the Band? Let us know what you think.

‘The Trial Of The Chicago 7’ Review: Aaron Sorkin & Superb Cast Deliver A Warning Shot From The Past With Strong Resonance For Today’s America