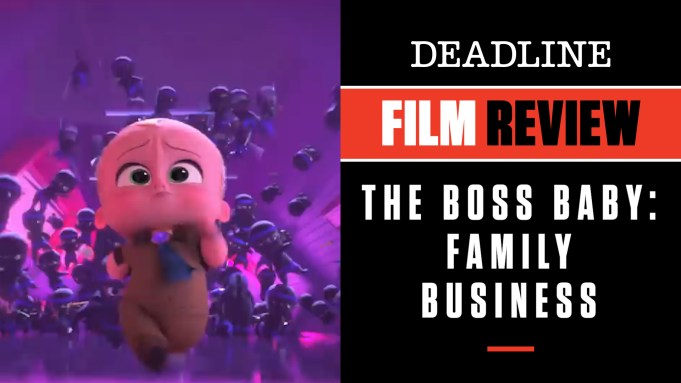 When you have a movie that makes a half-billion dollars globally, gets an animated feature Oscar nomination and sparks a successful Netflix TV series (The Boss Baby: Back In Business), it would seem to be a no-brainer for a big screen sequel, doncha think? Certainly that is what DreamWorks also thought and thus we have The Boss Baby: Family Business hitting theaters and streamer Peacock simultaneously Friday. I am not sure of the need creatively for a follow-up to 2017’s The Boss Baby, but original director Tom McGrath and his co-writer Michael McCullens have cleverly managed to bring back Alec Baldwin and James Marsden in a story set 25 years after the first one, but actually keep their youth intact.

How do they do it? Brothers Tim Templeton (Marsden) and Ted (Baldwin), the latter the precocious Boss Baby affiliated with Baby Corp in the first film, have drifted apart as they grew up. Tim is now a married, stay-at-home dad of two daughters, while Ted is a hedge fund CEO totally obsessed by his business as you might imagine. Circumstances bring them back together as Tim’s youngest, the infant Tina (Amy Sedaris), turns out to be cut from the same ambitious cloth as Uncle Ted and idolizes him. It turns out she is also a secret agent for the eponymous Baby Corp and launching an investigation into the dark practices of the unprincipled Principal Dr. Erwin Armstrong from 7-year-old sister Tabitha’s school, the Acorn Center for Advanced Childhood, at which Tabitha is a top student. That principal is quirky to say the least and in the voice of Jeff Goldblum you can imagine just how quirky.

Tim and Ted become a key part of the action when they use the formula that turns adults into babies but instead turn themselves into their younger-kid versions so they can blend in at the school and check out exactly what is going on there. A wacky adventurous trip, shades of Road Runner, becomes the comic set piece to send them on their way, and once they get there the mayhem continues as Tim and Ted do some sleuthing and watch out for Tabitha who is experiencing all the conflicting emotions and encounters of many kids her age. Armstrong has his own evil plans that must be thwarted, and to do that the Templeton duo gets busy, as it all comes to a head at the annual school pageant. Along the way the two estranged brothers find out the real meaning of family as they rekindle their own relationship.

McGrath’s visual style is a throwback to the wacky classics of the Chuck Jones era, a time when cartoons were actually funny. That is what I appreciated about the first Boss Baby, and why I may have liked this one even more. It is pure family entertainment that plays well to kids but doesn’t put their parents to sleep. It has heart to be sure, but the emphasis is on laughs and it hits more than it misses. Baldwin fits nicely back into the persona of the grown-up Ted, while Marsden has the perfect kind of “dad” temperament to make Tim so likeable. Sedaris is lively fun as Tina, and matched by the warm presence of fine voice work from Ariana Greenblatt as Tabitha, and Eva Longoria as Tim’s entrepreneur-wife Carol. Jimmy Kimmel and Lisa Kudrow are fun as the grandparents, and we also have the return of Wizzy (James McGrath), Tim’s magical alarm clock. But it is the dazzling vocal work of Goldblum as the key villain here that really pops.

Producer is Jeff Hermann. Check out my video review above with scenes from the movie.

Do you plan to see The Boss Baby: Family Business? Let us know what you think.