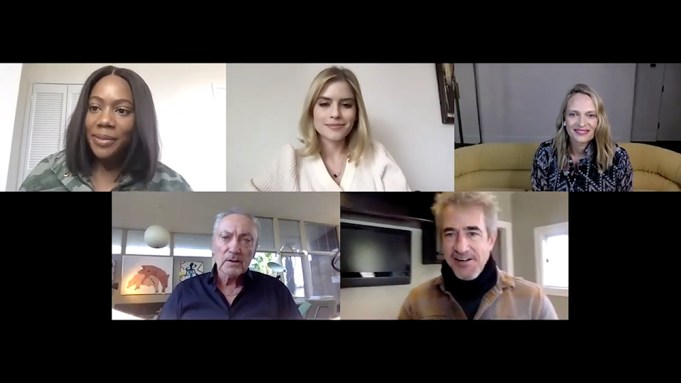 Burgeoning filmmaker Carlson Young returns to the Sundance Film Festival with The Blazing World, a fantasy thriller based on her 2018 short film of the same name, which also premiered at Sundance.

Marking her feature directorial debut, Young co-wrote and stars in the film, which is slated to premiere today at 3 PM PT. The plot follows a self-destructive young woman who decades after the accidental drowning of her twin sister, returns to her family home, finding herself drawn to an alternate dimension where her sister may still be alive.

Young  “was very inspired by Margaret Lucas Cavendish who, in 1666, wrote what is considered the first sci-fi fantasy prose novel ever written let alone by a woman,” she said during her stop at Deadline’s virtual Sundance studio.

“I was actually studying her in school and at the same time having recurring dreams about this gaping black hole. I started to dissect the dream and flesh out the story. I was trying to speak to the meaning of the dream. And it’s been a long journey. I’m a horror genre gal, a freak at heart. So I wanted to combine all of those elements and create something unique.”

Young was joined by her co-stars Vinessa Shaw, Dermot Mulroney, and Udo Kier, who all lauded Young for her unique spin. “When I saw the movie, it blew me away at how much it looked exactly like it was so uniquely described, said Mulroney. “It just really lived up to its promise, the script to the visuals.”

While Young is open to different audience interpretations, “What would really be nice is if the film is thought-provoking for people,” she said, “or maybe made them self reflect a bit about their life or any familial trauma that’s happened for them. And just the idea of we repeat what we don’t repair.”