Continue to Deadline SKIP AD
You will be redirected back to your article in seconds
Skip to main content
January 26, 2018 4:53pm 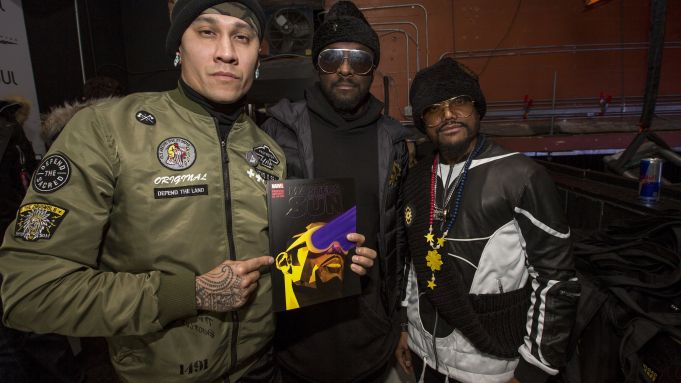 As the hip hop group known to “Get this party started”, The Black Eyed Peas are flipping the record over not just in terms of their songs, but how they’re delivered.

While their new track “Street Livin'” is a throwback to their socially conscious roots, and a step away from their party stompers like “Pump It” and “I Gotta Feeling”, The Black Eyed Peas arrived to the Sundance Film Festival this year sans Fergie to let the world know they’re tearing up the old records, specifically the means by which they deliver their music.

No not via digital, but rather via VR with the experience Masters of the Sun which is available on Google Play and the App Store and can be used with Oculus. “Street Livin'” is the first song off Masters of the Sun.

Because the whole notion of doing an album, per band leader will.i.am., is so “two thousand and late.”

“We’d release it and two weeks later, it would be done, which is back to my point: WTF is an album?!” exclaims will.i.am who arrived at Deadline’s studio with Taboo and apl.de.ap.

Masters of the Sun is set in Los Angeles 1983. The city has been spared from utter destruction driven by an ancient evil. The ghetto has become ground zero for a drug epidemic that has transformed citizens into soul-sucking zombies through Z-Drops. That is until a ragtag crew led by Zulu-X uses one weapon to take their city back: hip-hop.  Rakim, Queen Latifah, Jason Isaacs, Stan Lee, KRS-One, and Slick Rick star in Masters of the Sun with lead Artists being will.i.am, apl de ap, Taboo, and key collaborators Pasha Shapiro, Ernst Weber, Sara Ramaker, and Eddie Axle. The VR Experience is being simultaneously launched with a Marvel 114- page comic book, produced by The Black Eyed Peas and written by will.i.am and Benjamin Jackendoff.

The other eyebrow raising element of Masters of the Sun is that it does not involve longtime female BEP crooner Fergie. She’s been busy recently hosting the new Fox music competition The Four. There was a lot of back and forth last year on whether she left The Black Eyed Peas. In a recent Rolling Stone, profile apl.de.ap said that “Fergie is family,” with will.i.am saying, “Family is family, right? So…”

However, when we asked the BEP about who the future female voice would be in the band, will.i.am responded: “The great thing about virtual reality, you can create worlds and characters who aren’t real in the real world…The future of the Black Eyed Peas is creating awesome worlds and characters that might not exist in real life. But when you hear them, they’ll be just as real as real. And you can cast and get awesome singers whether they’re famous or not famous. You take someone who is not famous and make them famous. So many opportunities that you can do today with technology and tools, so much love and joy you can spread through these times. The past was the past. Tomorrow is going to be amazing, and that’s The Black Eyed Peas right now.”