Continue to Deadline SKIP AD
You will be redirected back to your article in seconds
Skip to main content
May 20, 2019 12:04pm 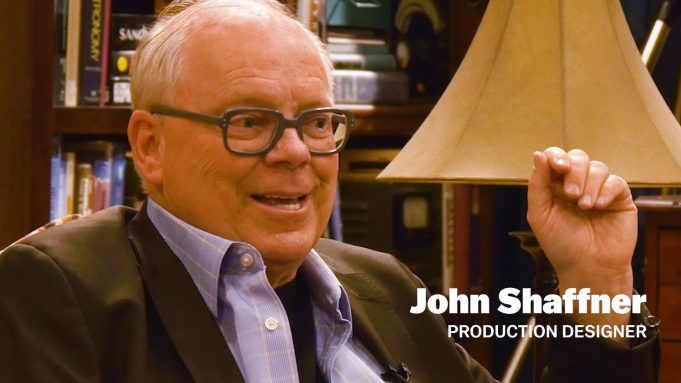 The longest-running multi-camera comedy in the history of television, The Big Bang Theory came to an end less than a week ago. After a 12-season run comprising 279 episodes, this moment meant as much to the show’s below-the-line team as it did to those legions of fans around the world—not least, production designer John Shaffner, a four-time Emmy winner, whose vision resulted in the sets for a singular sitcom world.

The first guest of Deadline’s Production Value video series on the road to the 2019 Emmys, Shaffner reflected on the unique emotional weight that comes with 12 years on the set of one series. “When you think about 12 years, you sometimes reflect on the past, what other 12 years meant to you. 12 years is from first grade to senior in high school; from senior in high school, through college, till you’re settled in your life,” the production designer says. “So, [in] 12 years, there’s a lot [that] can happen.”

Debuting on September 24, 2007, The Big Bang Theory centers on Sheldon and Leonard, two brilliant but socially awkward physicists, and their equally endearing group of friends. With little knowledge of life outside the laboratory, the group gets to know Penny—an aspiring actress living nearby—and their world begins to change.

Embodying the opportunities and challenges that make the sitcom format unique, The Big Bang Theory called for 24-episode seasons, and a handful of key sets (including Sheldon’s apartment) that would feature in every episode, becoming essential to the series’ DNA.

Over the last 26 years, Shaffner has taken on “134 pilots and 54 series,” including such iconic sitcoms as Friends and Dharma & Greg, always with an awareness of the tradition he’s working within. A “theatrically inspired” way of working going back to I Love Lucy, the multi-camera sitcom environment is comprised of a set with three walls, and a live audience sitting where the fourth would be.

For the production designer, the format proves particularly challenging on those rare occasions, when an episode calls for a look at that fourth wall—the one that doesn’t exist. “Sometimes, like on Two and a Half Men, they’d shoot the reverse and we’d go, ‘Oh, God. What are we going to put on that wall?’ So, I put in a door that would have been to a closet, and two more windows. But by then, you’ve used up all the good stuff; you already have the kitchen, and the hallway, and the door, and the window,” Shaffner explains. “So it’s like, ‘The fourth wall? Well, [there are] some windows. Let’s not look at it too close.’”

On single-camera series, a production designer might have time to come in and “move the vase over three inches” for a shot, Shaffner adds. But on a multi-cam series, “we have to be careful that everything is a composition, no matter which way the camera is focused.”

Typically, with any given episode of a sitcom, Shaffner has a week or two of prep time up front. “I have the chance to read a script, analyze the geography, analyze the emotional content, and figure out how we’re going to create this on a stage,” he shares. The first of “a long chain of people who have to bring everything together,” Shaffner then engages in discussion with a wide variety of artisans to bring the script to life, through “collaboration and communication.”

By the time The Big Bang Theory wrapped, Shaffner was already at work on two other acclaimed sitcoms,The Conners and Mom. At the same time, there was a real sense of nostalgia, as he walked Deadline through the sets of the CBS series, which had been his home for so many years. Oftentimes, when series come to an end—however iconic they may be—beloved sets and props simply vanish, a reality that can be difficult to digest. When it comes to The Big Bang Theory, Shaffner hopes the situation will be different. “We’re looking into a new world now where Warner Bros. and other studios are understanding that these things that people live with in their homes, when they watch a show like this everyday, become touchstones to all kinds of things, and memories,” he says, “and it’s important that we keep these.”

To view our conversation with Shaffner on the set of The Big Bang Theory, click above.