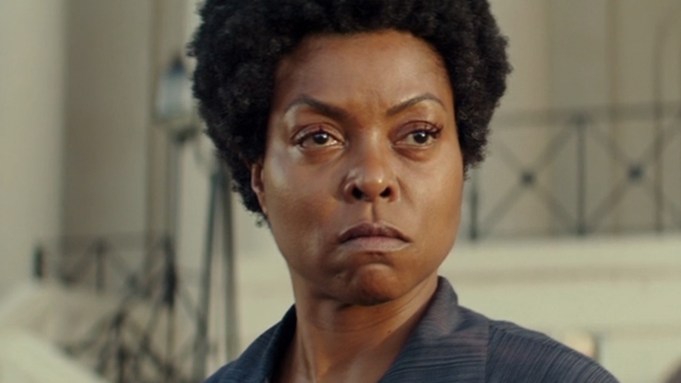 In the vein of Oscar-winning movies as The Defiant Ones and In the Heat of the Night all the way up to this year’s big Best Picture winner Green Book, comes The Best of Enemies. Set in 1971, the film somehow manages to put an African-American civil rights activist and a local Ku Klux Klan leader on a path together than no one could have seen coming in the Southern town of Durham, N.C., where this film dealing with racial strife presents one big problem for both sides. But, like Green Book, it all happened, it’s all true, and it delivers a powerful and entertaining message almost a half-century later that is especially pertinent at a time when polarization in America is getting even worse.

Ann Atwater (Taraji P. Henson) is the kind of aggressive activist who constantly is pushing the all-white-male City Council to do better for the underserved black citizens of Durham. When the school in an all-black neighborhood has severe fire damage, the council determines the kids should just make do with whatever few rooms are still standing. But Ann sees it another way and pushes to have them bused to a white school, where they can continue their semester and get a better education. Despite the landmark 1954 ruling Brown v Board of Education, this town still is very segregated.

Into all this comes Bill Riddick (Babou Ceesay), an NAACP representative who organizes a charette, a gathering taking place in a specific time period (sometimes days or weeks) where both sides must come together face to face until they can mutually solve the problem. Whatever is decided will be what the town has to enact. To do this, Riddick — who served as a consultant on the film, as did Atwater before she died — knows he has to have two completely opposite leaders who preside over a democratically chosen group of “supposedly” non-biased citizens. That is how Atwater and C.P. Ellis (Sam Rockwell), a gas station owner and Exalted Cyclops of the local KKK, find themselves reluctantly in a similar position, two opposites if ever there were.

Atwater is about as feisty as they come. Ellis is a white man who never caught a break and just wants to belong to something, hence his card-carrying membership in the Klan. The racist council members feel they are safe in having him at the helm of their side, and it does appear the deck is stacked against Atwater as the charette proceeds. Like the aforementioned movies that deal with conflict between a white and a black character, this movie takes its cue from what actually happened in that town that year and, as unbelievable as it might sound, this is largely a nonfiction account. In fact it is based on a book by Osha Gray Davidson, a documentary and later a play all telling this extraordinary true tale.

Debuting writer-director Robin Bissell (producer of The Hunger Games, Seabiscuit and Pleasantville) knows a good project when he sees one and manages to make this compelling throughout, without ever losing sight of the fact this it’s primarily a story focused on two very different people with very different life experiences brought together with a shared humanity in the service of these children. No, for all the snarky critics out there who tried to label Green Book and some other films as “white savior” movies, this also is not that. How could it be when the key white character is a member of the KKK and this all really happened? If anyone is the savior in this instance it is the Bill Riddick character, who managed to bring a racially divided town together in a unique and inventive way that ought to be tried now. Let’s start with Donald Trump and Congress.

The acting across the board is uniformly fine. Henson is superb and so is Rockwell, who won an Oscar last year for playing a racist of a different stripe in Three Billboards Outside Ebbing, Missouri but manages to make C.P. Ellis unique in every way. Anne Heche as his wife also is very fine in her few scenes, not at all the Southern stereotype of the period and a voice of reason considering to whom she is married. Ceesay is terrific, and there’s good work from Bruce McGill, Nick Searcy, Wes Bentley and particularly John Gallagher Jr. as a citizen whose business is threatened when he chooses to support Atwater’s cause.

Do you plan to see The Best of Enemies? Let us know what you think.