Continue to Deadline SKIP AD
You will be redirected back to your article in seconds
Skip to main content
March 27, 2019 3:51pm
6Comments 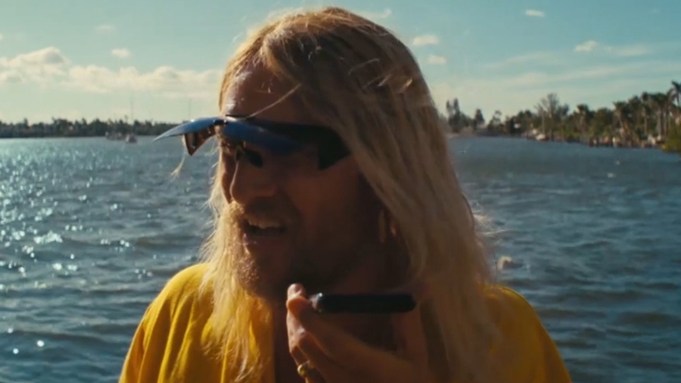 The description for the R rating given Matthew McConaughey’s new film probably says all you need to know: “drugs, alcohol, nudity, sex.” That not only sums up how The Beach Bum got the R, it pretty much also sums up the plot of this movie. Actually, check that: There really isn’t a plot.

The Beach Bum is exactly what its title suggests, another excuse for its star to take his affable stoner vibe out for a cinematic ride. This time it’s courtesy of writer-director Harmony Korine, who is back working in the same milieu as his Spring Breakers. “I’m a bottom feeder. I go low to get high,” says McConaughey’s character Moondog. Yep, that’s about right. He actually is playing a fairly well-regarded poet whose procrastination has delayed his latest book. He’s a freewheeling stoner who would rather enjoy the high life than do any meaningful work, so we see him doing just that in the colorful and warm environs of Miami Beach, where he travels in his boat named Well Hung.

Instead of one toke over the line, this is all just one joke over the line, played ad infinitum. No big laughs here, but McConaughey seems to be having a great time, and frankly his Moondog is infectious to watch if you’re in the mood for a time-waster. But it’s just a freewheelin’ riff for a fine actor who won an Oscar for Dallas Buyers Club and did terrific work in the same period like Lincoln Lawyer, Mud, Paperboy, Magic Mike and other well-regarded movies that raised his career to a new level. With The Beach Bum he’s bottom feeding again with the sort of material that he had in Surfer, Dude a decade ago. Sometimes it is apparent he can’t resist this kind of stuff. Considering a film debut in Dazed and Confused a quarter-century ago, it seems every now and then McConaughey has to get his rocks off with a bongo-playing character that makes Cheech and Chong look like Nobel Laureates. But hey, that’s alright, alright, alright.

But back to the plot. Oh wait I forgot, there isn’t one. Moondog’s wife (Isla Fisher), who is having an affair with Snoop Dogg (are you shocked?), suddenly dies in an accident. Unfortunately for Moondog, there can be no inheritance (and she’s loaded) until he finishes his book of poetry. This is designed to give him some ambition. So that’s the plot. Along the sun-drenched way we meet a number of colorful characters including stoned Zac Efron, a Southern-talking Jonah Hill, even Jimmy Buffet himself in his own Margaritaville moment. Best of the bunch is Martin Lawrence as a tour guide who has only lost four customers on his boat and counts a coke-sniffing parrot as companion. When he mistakes a school of sharks for dolphins, he becomes lunch. Did I say I really also liked the soundtrack of soft rock oldies? Nice touch for Korine, whose films are an acquired taste. For this one it might help if you imbibe in the same kind of substances as the characters onscreen. Neon opens it Friday. Watch my video review above with scenes from the film.

Do you plan to see The Beach Bum? Let us know what you drink… er, think.