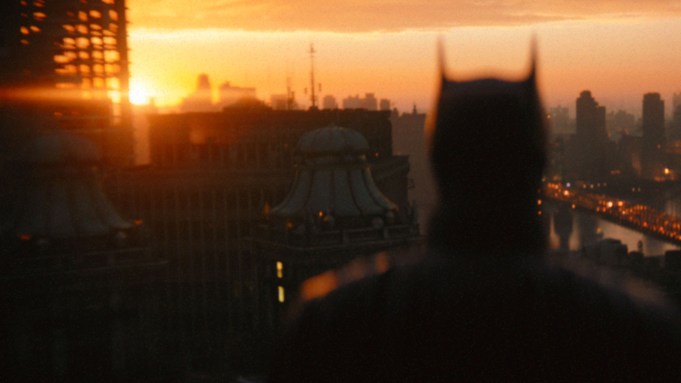 A year after the inaugural DC Fandome revealed the first The Batman trailer from filmmaker Matt Reeves, we now get a second before the pic’s theatrical release on March 4, 2022. And we finally get to see the villains: Paul Dano as The Riddler, Zoe Kravitz as Catwoman, and Colin Farrell as a very unrecognizable Penguin with an arguable New York accent.

So what else do we have here?

There’s a noir tone with an opening image in the trailer of a shot that looks like it’s paying homage to Edward Hopper’s 1942 oil painting Nighthawks laced with the Blade Runner 2049 set.

We see Dano’s Riddler getting arrested, leaving a cappuccino behind with a question mark set in the foam.

Lots of Dark Knight fisticuffs, lots of gang war with guys in painted make-up. We meet Kravitz’s sleek Selina Kyle who tells Batman, “I can take care of myself…..Maybe we’re not so different. Who are you under there?”

“If this continues, it won’t be long before you have nothing left,” warns Alfred to Batman.

There’s a grand pursuit of Batman in the Bat Mobile after The Penguin, resulting in the latter’s flipped car.

It’s best if Oswald Cobblepot heeds the words of the Dark Knight at the start of the trailer, in case he wasn’t listening: “When that light hits the sky, it’s not a call — it’s a warning.”

Preceding the trailer drop, Reeves, Kravitz and Pattinson spoke about the film.

Pattinson called this version of Batman, which is based on Year One, “radically different”.

“He hasn’t defined what Batman is,” says Pattinson about his Bruce Wayne.

“There’s a desperation to it,” said Kravitz about The Batman, “He’s working out this rage. All the fights seem personal.”

No word was mentioned today about the upcoming Batman spinoff HBO Max series.