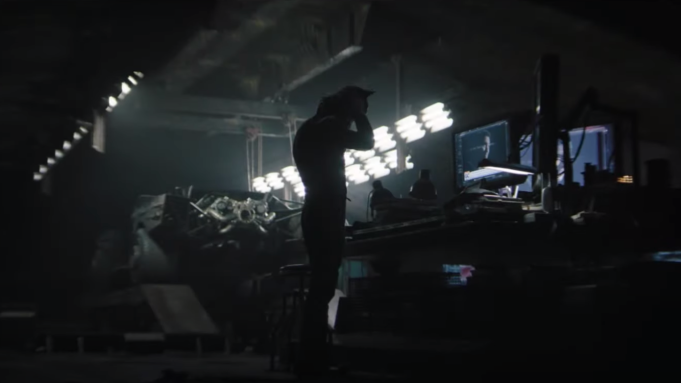 Waner Bros. Japan dropped two new looks at its upcoming The Batman, starring Robert Pattinson, and each offers surprises. Most important for fans is a hint of the Joker in director Matt Reeves’ take on the iconic comic book property.

The first, longer trailer is centered more on Bruce Wayne than his becowled alter ego.

“I’m here to unmask the truth about this city,” says a voice as we watch footage of Pattinson’s Bruce Wayne intently observing his environs along with snippets showing tabloid news stories with the word “LIES” scrawled across them.

Another voice, presumably that of Paul Dano’s Riddler says, “You’re part of this, too.”

Wayne is heard replying, “How am I part of this?”

“You’ll see,” is the response.

A shot of newspaper clippings pinned to a wall 12 seconds in may be a sort of Rosetta Stone for the film. It contains multiple photos of Bruce Wayne, as an adult and as a child. In the bottom right, there’s an image of him in profile. Looking very closely behind him is what appears to be a very familiar chin, nose and grin: Those of a Killing Joke-era Joker.

It’s the kind of breadcrumb only an OCD fan (or supervillian) might find, and it’s the only hint of Batman’s greatest rival thusfar in Warners’ latest iteration of the Batman story. (Unless you, like many fans, think that’s the Joker’s laugh at the end of the trailer.)

The news clippings also contain a hint at a childhood connection between Bruce Wayne and the Riddler.

In many of the photos, the eyes of Bruce and what appears to be his father, Thomas, are scratched out. Three of the clippings in the center of the collage contain the same image, which seems to show a young Bruce Wayne with his mother and father and a choir in the background.

One of the boys in the choir has glasses and bears a striking resemblance to Dano. He is also wearing glasses, a key trait of the Riddler. He is the only person in the photo looking directly at the camera, and in one image the villain’s question mark logo frames the boy’s face. If that weren’t enough, the phrase “If I only knew then… what I know now…” is scrawled in the middle of those photos.

The second, 30-second spot released yesterday fleshes out what the begoggled Riddler is up to. It contains a greeting-card style missive opened by Alfred with the words, “Haven’t a clue? Let’s play a game, just me and you” on it. The card is marked with hieroglyphic-style symbols, as well.

Alfred says, likely to Bruce Wayne, “Why’s he writing to you?”

The answer to that question may turn out to be the driving force behind Reeves’ film.