Continue to Deadline SKIP AD
You will be redirected back to your article in seconds
Skip to main content
March 5, 2020 4:20pm
1Comments 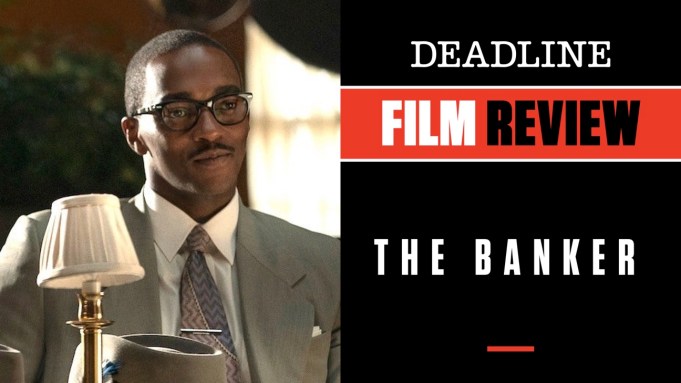 It may have gotten off to a rocky start, but Apple TV+’s first venture into motion pictures, The Banker, is an inspiring and highly entertaining look at a couple of early 1960s entrepreneurs who pull off one of the wildest cons of all, one that has the best of intentions.

Originally slated to have its world premiere in November at AFI Fest, followed by a theatrical break in December, all those plans were put on hold while Apple investigated explosive charges brought against one of the film’s executive producers, Bernard Garrett Jr., the real-life son of the man played by Anthony Mackie in the film. Garrett Jr. is no longer involved in the film, and now Apple has decided to proceed with a release in theaters Friday followed in two weeks by its streaming debut. Whatever the issues inside the Garrett family, the film itself thankfully stands on its own and is well worth seeing. Moviegoers are going to get the chance now to do just that.

Set in 1963, around the same time the 2018 Best Picture Oscar winner Green Book took place, this is another story that brings to light the difficulties of being black in America around that time, just before the Civil Rights Act was finally passed. Unlike Green Book, which took place mostly in the Deep South, this story starts in L.A., where the sad fact of housing segregation is a bit more surprising as seen through the eyes of 2020. It centers on a math wizard named Bernard Garrett (Mackie), whose talent with numbers and real estate, and desire to do something for the black community, leads him to a partnership with real estate whiz Joe Morris (Samuel L. Jackson), who owns 17 buildings. But what Garrett really wants to do is buy and sell homes in white neighborhoods in order to spark integration and improve the lives of those he helps.

Morris joins in reluctantly at first because the sad fact is the color of their skin means no one in power will get into that kind of business with them. Soon though, Garrett has an inspired idea: they hire a front, a white guy named Matt Steiner (Nicholas Hoult), who, in pure Pygmalion style, they teach everything they know about the complicated numbers game of real estate as well as how to play golf, since that is what Morris says he has to know in order to get anything done in the white businessman world. Turns out Matt has a real propensity for real estate and soon the game is on, even as Morris has to pretend he is a chauffeur and Garrett a janitor in order to keep an eye on their progeny. It only gets very complicated when the partners cast their eye on one of the tallest buildings in L.A., one with a lot of banks in it that had refused to do business with these guys. And Garrett complicates things further by secretly going back to his native Texas  to buy the Midland bank.

If you think bankers and real estate developers are not a recipe for a pulse-pounding movie, think again. Despite the density of numbers being thrown around and complex transaction details, director George Nolfi creates a lot of tension and suspense as the scheme starts to come apart. The remarkable thing is it is all true, and it is brought to the screen in great style. The script is credited to Niceole Levy, David Lewis Smith, Stan Younger and Nolfi and, though extremely complicated at times, really delivers in every way.

So does the cast, with a best-ever Mackie and a performance from Jackson in which he is clearly having a ball. Hoult is the perfect counterpart as their “Eliza Dolittle,” and Nia Long is warm and winning as Bernard’s wife, Eunice. The re-creation of early-’60s L.A. and small-town Texas is spot on. Taken on its own terms, The Banker is an investment of time worth making.

Check out my video review above with scenes from the film. Do you plan to see The Banker? Let us know what you think.