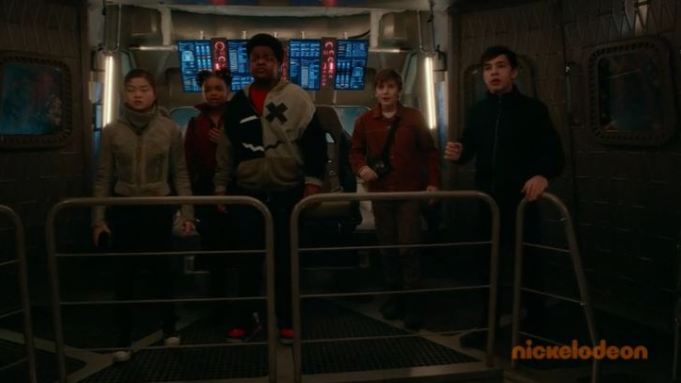 Five children sneak onto a rocketship. “It’s the opportunity of a lifetime!” one tells the others. As the kids today say, “What could go wrong?” Well, the airlocked door closes and a computerized voice welcomes them. Then they hear, “Commencing launch sequence.”

Here is the first trailer for The Astronauts, a live-action adventure series from Nickelodeon and Imagine Kids & Family that blasts off November 13 with an hourlong premiere on Nick. Check out the clip above, the key art at right and a behind-the-scenes tour below.

The logline: The spacecraft Odyssey II is set to launch on a mission to retrieve a foreign object that potentially could save mankind.  The plan quickly goes awry when five untrained kids use their parents’ security clearances to sneak onto the empty ship. Soon after they board, the onboard AI system triggers the launch sequence. Unable to stop the ship from blasting off, the kids must assume their new role as astronauts and brave harrowing tasks, as their parents rush to find a way to take control of the situation.

The Astronauts is created by Daniel Knauf, who also serves as writer and executive producers. The series’ directors are Dean Israelite and Star Trek franchise veteran Jonathan Frakes.