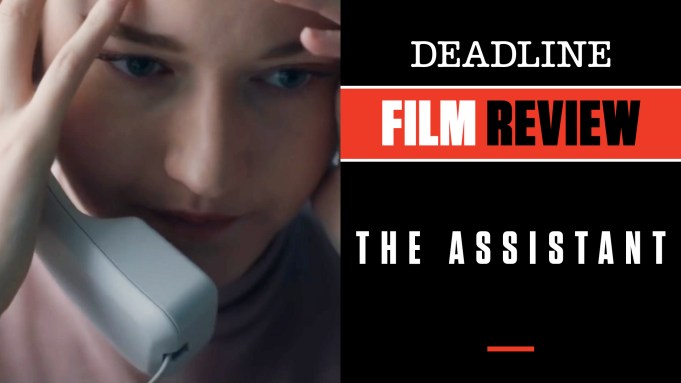 Without flash or melodramatic tendencies, documentarian Kitty Green makes an impressive narrative debut with The Assistant, a quietly effective roman à clef clearly inspired by the scandals surrounding Harvey Weinstein. First seen at the Telluride Film Festival over Labor Day and screened last week at the Sundance Film Festival, this low-key, almost cinema verite look at one day in the life of a young female assistant working at a movie production company in the Tribeca area of New York City is a slow-burning exercise as she realizes her boss just may be a sexual predator.

Although we never see him, and his name is never mentioned, it is obvious who this boss is supposed to emulate. His voice is in fact heard only once, screaming at her on the other end of the phone, but a sharp picture of who he is and how he treats his employees is unmistakably someone who could be Weinstein — but it could be others too. Green is quick to say this is actually meant to be something more universal, that this kind of behavior is something that happens not only in entertainment industry offices but anywhere, and that is why she doesn’t draw it directly to Weinstein but keeps it a little more of a guessing game.

The movie posters hanging on the walls of the movie production office are in fact fake titles, but the humiliation this new office assistant named Jane (fresh out of college and aspiring to be a producer) goes through is heartbreakingly real. She is played with understated grace and subtlety by Emmy winner Julia Garner (Ozark), who is consistently compelling to watch, especially in the film’s most harrowing scene set in the human resources office as she brings her concerns to the man (Matthew McFayden) who might as well be the Palace Guard for his boss.

As the movie begins, you won’t even have much of a clue that this isn’t some sort of intimate look at the life of any ordinary office worker. Jane staples papers, makes coffee, picks up things as she is first to arrive in the morning, and even cleans up a couch where she also finds an earring, perhaps a first indication something untoward might have happened there the night before. It is definitely a clue of what is to come as she also has to deal with the more seasoned male assistants who work in the outer office with her, and who tend to give her advice on not stepping on any toes and how to deal with the unseen master of this domain.

This is a deceptively simple film, not one that pretends to be anything other than a revelation of the realities of office politics in dealing with a scary proposition that you are working for someone in a powerful position who takes advantage in every way. Green’s remarkable achievement here is just to let it play out, almost mundanely, until the whole picture is right there in front of us.  Garner is simply superb, resisting any opportunity to ever let us see her acting. I was impressed.  This movie will stay with you and make you think. Producers are James Schamus, Scott Macaulay and P. Jennifer Dana. Bleecker Street releases it Friday.

Check out my video review with scenes from the film by clicking the video above. Do you plan to see The Assistant? Let us know what you think.