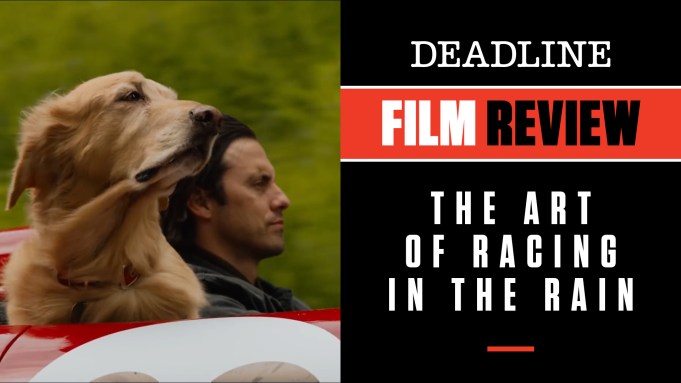 It might sound odd to say it, but Kevin Costner gives one of the best performances of his career in The Art of Racing in the Rain, but you never once see him onscreen. His touching, funny and very wise work as the voice of Enzo, the car race-loving and philosophical dog at the heart of this adaptation of Garth Stein’s bestselling book, is truly extraordinary.

The book stayed on the New York Times Best Seller list for 3 1/2 years, translated into 38 languages, and has finally, and lovingly, been brought to the screen in a superb way by director Simon Curtis (My Week With Marilyn, Woman In Gold) and screenwriter Mark Bomback. They have created a real crowd-pleaser, a wonderful, funny, joyful and enriching motion picture experience not just for dog lovers and lovers of dog movies (count me in), but everyone who still has a beating heart.

Milo Ventimiglia plays Denny Swift, an aspiring Formula One driver who one day adopts golden retriever Enzo as a puppy. The two are inseparable, and Enzo takes a keen interest in his new master’s profession, uniquely tying a philosophy of life into what drivers must use to win on the track. As the years go by, eventually life intervenes when Denny meets the woman he will marry, Eve (Amanda Seyfried), and they have a daughter named Zoe. Suddenly Enzo has his hands full, and this becomes a full-bodied family story, one in which tragedy intervenes. That is where complication also rears its head in the form of a major family conflict between Denny and his in-laws (Kathy Baker and Martin Donovan). Balancing the personal problems with his professional goals, there’s always Enzo, who acts as kind of a guide for the audience through it all.

Although auto racing is a key component, The Art of Racing in the Rain is first and foremost a human and humane story that is simply glorious, centered on a dog whose real desire in life he says is to become human one day. It seems Enzo, who watches a lot of TV, saw a documentary about Mongolia, where local custom convinces him that in his next life he will indeed become a human. That is always lurking in the background of the current life he leads, a dog wiser than any human he actually knows.

Costner is key to making this work, with a vocal performance that never misses a beat. There wasn’t a moment in this heavily-narrated film that I didn’t believe he was Enzo. This is the art of doing voice-over in movies.

Ventimiglia is perfectly cast in the lead human role, a compassionate man facing some tough times and trying to keep his life on track. Seyfried offers a warm presence as always, but beyond Costner’s superlative work, you have to credit the two dogs who play Enzo so brilliantly. Parker embodies him at 2 years old, and then Butler takes over at age 8, the former with especially soulful eyes that will make you melt. Camera work by Ross Emery is right on target, always seeming to feature the POV of the dog, not an easy task. In a summer of sequels and remakes this one is a purebred original about a dog who can teach us all invaluable lessons about life.

Producers are Neal H. Moritz, Tania Landau, Joanie Burstein and Patrick Dempsey, the actor who is a race car enthusiast himself and optioned the book several years ago. Check out my video review at the link above, which includes scenes from the movie. Disney releases the 20th Century Fox and Fox 2000 film on Friday.

Do you plan to see The Art of Racing in the Rain? Let us know what you think.