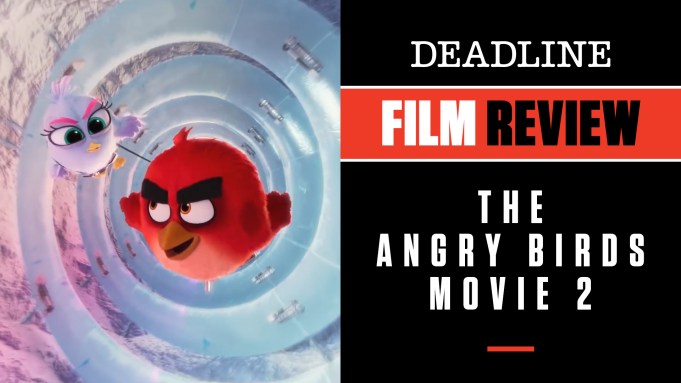 I have to confess I was not a fan of 2016’s The Angry Birds Movie. Not that I expected to be, since I clearly wasn’t the audience and had no clue of the popularity of the original game that spawned the craze in the first place. The movie just seemed too disconnected and frenetic, with little attention to anything resembling a coherent storyline. What a difference three years make, because I have to admit I almost had as good a time as all the kids sitting around me when I saw the sequel, The Angry Birds Movie 2. The plot development and storyline are just as chaotic and inconsequential as the first one, but the individual gags and comic set pieces are, at times, inspired, and for the most part never less than amusing. It is a wacky, fast-paced delight that reminded me of Chuck Jones and Looney Tunes — maybe not at their best to be sure but for these times damn close enough to grab three stars from me. It is the kind of movie where blink and you miss bits like one bird reading the bestseller Crazy Rich Avians.

You might recall the Bird Island occupants of the first film, led by Red (the voice of Jason Sudeikis), Chuck (Josh Gad) and Bomb (Danny McBride) were at odds, to say the least, with the green piggies who invaded their space. In this film, Red, Chuck, Bomb, Mighty Eagle (Peter Dinklage) and the addition of Chuck’s brainy sister Silver (Rachel Bloom) team with pigs Leonard (Bill Hader), Courtney (Awkwafina) and Tech Pig (Sterling K. Brown) to fight an even bigger threat that brings them together in a mutual effort for survival, and the legacy of Bird and Pig islands. Now they are stuck in frozen conditions, far from the breezy and sunny tropical climate to which they were accustomed. This of course would make any bird angry, and instant frozen food.

Setting off in pure Kurosawa fashion, the team is put together to defeat the Superweapon and machinations of Zeta (Leslie Jones), the purple-necked eagle villain of this piece who is looking to have her way on her icy island where she is banished but not above looking for ultimate creature comforts. There are a boatload of characters to keep straight including Glenn (Eugenio Derbez), Debbie (Tiffany Haddish — is there a movie she isn’t in?), Jerry (Pete Davidson) and more requiring the vocal talents of the likes of Maya Rudolph, Tony Hale (very funny as Mime),  Nicki Minaj and Lil Rel Howery among others thrown into this amusing stew.

Sony Animation proves itself highly capable of coming up with genuinely funny cartoon antics that make for a breezy good time that even adults dragged along with their kids will get some laughs from. Thurup Van Orman makes an effective leap to directing in his first feature after lots of success in TV. The script has some winning lines and sight gags thanks to writers Peter Ackerman, Eyal Podell and Jonathan E. Stewart. Voice work across the board is exemplary. The producer is John Cohen.

Sony Pictures decided to get a jump on what remained of school still being out and opened Tuesday, when I caught it. Check out my video review with scenes from the film above.

Do you plan to see The Angry Birds Movie 2? Let us know what you think.