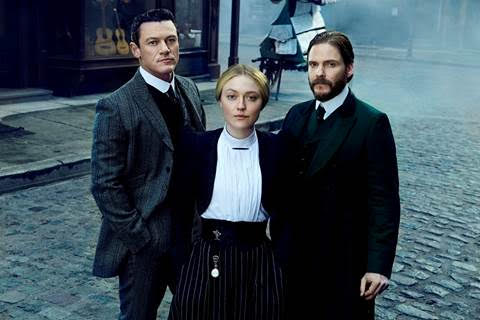 The move eliminates the one week gap that had existed after the end of TNT’s current prestige series, Snowpiercer. <That show’s’s two-hour finale airs on Sunday, July 12 starting at 9 p.m. ET/PT.

PREVIOUSLY, MAY 21 TNT’s Emmy-winning psychological thriller returns with a new season titled The Alienist: Angel of Darkness. Season 2 of the show premieres Sunday, July 26 at 9 p.m. ET/PT, the week after Snowpiercer’s finale. The network has released the trailer which you can watch above.

Season 2 is based on best-selling author Caleb Carr’s novel The Angel of Darkness, and The Alienist’s lead cast Daniel Brühl, Luke Evans and Dakota Fanning will return.

An unflinching, gripping, turn-of-the-century murder mystery that spotlights both New York’s wealthy elite and the struggling underbelly of the city’s “Gilded Age.” In The Alienist: Angel of Darkness, Sara (Fanning) has opened her own private detective agency and is leading the charge on a brand-new case. She reunites with Dr. Kreizler (Brühl), the formidable alienist, and John Moore (Evans), now a New York Times reporter, to find Ana Linares, the kidnapped infant daughter of the Spanish Consular.

Their investigation leads them down a sinister path of murder and deceit, heading towards a dangerous and elusive killer. As in The Alienist, the series shines a light on the provocative issues of the era –- the corruption of institutions, income inequality, yellow press sensationalism, and the role of women in society –- themes that still resonate today.

In addition, Brittany Batchelder, a guest star on The Alienist, has been elevated to a recurring role for Season 2. She plays Joanna, Cyrus Montrose’s niece, who returns to New York as an aspiring journalist who becomes a protege to Luke Evans’ John Moore at the New York Times.