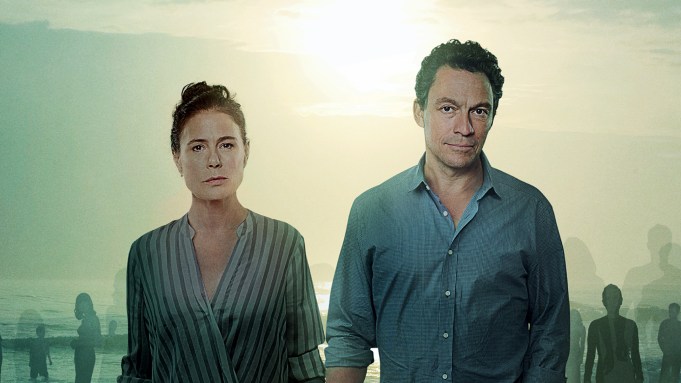 Showtime’s new, full trailer for the fifth and final season of The Affair offers considerably more (and juicier) clues than the first-look teaser released a few weeks ago. We see what appears to be one of the primary set-ups for the season – it seems a movie is being made of Noah’s memoir, and his ex, Helen, has fallen for the hunky action star (Claes Bang) who plays him.

Makes sense. “He’s pretending to be me,” says an exasperated Noah (Dominic West) to Helen (Maura Tierney), who shoots back, “You, but he’s better.” (Leave it to Helen’s mom, though, played by the great Kathleen Chalfant, to come up with the best zinger – about her own daughter: “She’s sashaying around Hollywood like she’s Nicolle Kidman…”).

We also get a glimpse of a new – or, at least, heavily modified – character: With one storyline set well into the future, little Joanie Lockhart, the character we’ve always known as the young daughter of Alison and Cole, is now depicted as an adult, played by Anna Paquin. She seems to be looking for answers to the death of her mom (Ruth Wilson, no longer on the show), which viewers know to have been murder. The trailer offers no clues as to what became of her killer.

There’s also some drama involving bride-to-be Whitney (Julia Goldani Telles, with Jadon Sand playing brother Trevor), as well as Noah’s girlfriend and boss Janelle (Sanaa Lathan). And, of course, there’s a car accident – wouldn’t be The Affair without one.

The Affair returns for its final season on Sunday, August 25 at 9 p.m. ET/PT on Showtime. Check out the trailer above, and here is the new poster art released today by Showtime: