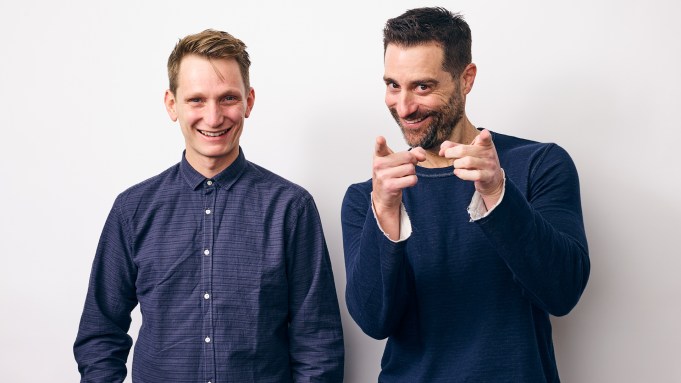 The filmmakers behind The Aeronauts went to great lengths — and heights — to make their movie about pioneering balloonists in 19th century England. So did stars Eddie Redmayne, who plays meteorologist James Glaisher, and Felicity Jones, cast as daredevil pilot Amelia Wren.

“Right from the very beginning Felicity was really determined to embrace the physical attributes, the physical side of the performance,” director Tom Harper said recently at Deadline’s annual The Contenders New York. “She did the vast majority of her own stunts including actually flying in the balloon with Eddie and she climbed out of the basket at 3,000 feet as well and sat on the hoop of the balloon.”

Deadline’s Pete Hammond asked producer Todd Lieberman if he didn’t have qualms about subjecting his stars to danger at high elevation.

“They’re phenomenal,” Lieberman replied. “It’s worth saying how talented, how dedicated they are, but it’s also worth saying just how great they are as people and that adds just to the beauty of making a movie like this.”

The Aeronauts, released in theaters earlier this month and now streaming on Amazon Prime, reunites the leads from 2014’s The Theory of Everything, which netted an Oscar nomination for Jones and an Oscar win for Redmayne. The earlier film was based on the true story of physicist Stephen Hawking and his wife Jane Hawking; The Aeronauts, too, is inspired by true events.

“It’s based on an amalgam of different stories, actually,” Harper said. “There’s a beautiful book I read called Falling Upwards by Richard Holmes and that sort of recounts some of the first journeys into the skies that humans took in balloons…We’ve taken from a number of different flights and then based around this one flight in 1862 where they got to 36,000 feet, higher than anyone’s been before or since actually without additional oxygen.”

It’s mighty cold up in that thin atmosphere. Redmayne and Jones got “help” making it appear real.

“For a scene like that where they are freezing we had a stage that was set below zero temperature with ice buckets around the stage,” Lieberman said. “They would put their hands in the ice buckets, go into a freezing environment. So when they’re there the breath coming out is real. The capillary and the redness on their face is a mixture between phenomenal makeup and hair and real blood vessels. So they weren’t acting freezing. They were actually freezing.”