Continue to Deadline SKIP AD
You will be redirected back to your article in seconds
Skip to main content
December 5, 2019 10:21am 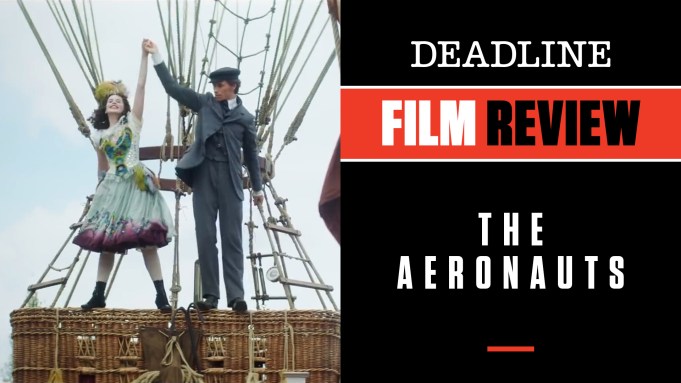 Call it “The Theory of Getting High.” But the real title is The Aeronauts, a rousing good time at the movies for the entire family. The Theory of Everything stars Eddie Redmayne and Felicity Jones retewam to take on the world of hot-air ballooning in 1862, when the sky was the limit and thrilling adventure was the name of the game. Amazon Studios made this movie with Imax screens in mind, but its release plans changed, and now as this celebrated acting pair will go streaming to new heights in the atmosphere, their movie will hit streaming on Amazon Prime Video  just two weeks after its theatrical debut on Friday.  But I highly recommend seeing it on the big screen if you can find it.  For those with Amazon Prime however, it still is an undeniable  holiday treat — even with the air punched out of a true theatrical release that would have provided ideal fodder for families looking for an excuse to get out of the house and the winter chill together.

Jones plays Amelia Wren, a character inspired by real-life female adventurers like similarly named aviator Amelia Earhart. She is a flamboyant daredevil who plots to pilot her hot-air balloon and fly higher than anyone ever has, about seven miles above sea level. Joining her on the journey is James Glaisher (Redmayne), a young man looking to get advance knowledge of how weather changes in the earliest example of meteorology. Through flashbacks we learn their various backgrounds and personal reasons for making the daring trip together as they find themselves in way over their heads when nature takes over and the thrills come one after another.

The stunt work and special effects are first-rate in a movie that recalls a time when Hollywood was obsessed with Jules Verne novels and turned out one movie after another with fantastical tales of human exploration into points unknown. This is fun stuff and even a bit nail-biting as the balloon gets higher into thinner and considerably much colder air. Should they go back or keep on soaring? This is the movies, folks, so you know what the answer to that is going to be.

Right from the get-go, as Amelia turns the launch into an entertaining show for the crowds, it is clear this story belongs to its two leads. However, we do get introduced to others in their lives, mostly in brief flashback scenes, including Wren’s husband (Vincent Perez) and Glaisher’s ailing father (Tom Courtenay), in addition to stuffed shirts doubting the value of this mission etc. Such stalwarts as Anne Reid, Phoebe Fox and Himesh Patel also get a bit of screen time, but it is Redmayne, Jones and the exceptional filmmaking team led by director Tom Harper who get the credit for taking us credibly back to a time when everything seemed possible and everything was still ahead of us. Ironically it is largely the tricks of digital-age technology that enabled these filmmakers to so realistically deliver a portrait of a time when it was pure human innovation and knowhow that laid the groundwork for flights into the mysteries of the world.

The film had its liftoff on the festival circuit beginning with Telluride in September. Producers are Harper, Todd Lieberman and David Hoberman. The perfectly pitched script comes from Jack Thorne, with a story by him and Harper. Check out my video review with scenes from the movie by clicking the link above.

Do you plan to see The Aeronauts? Let us know what you think.