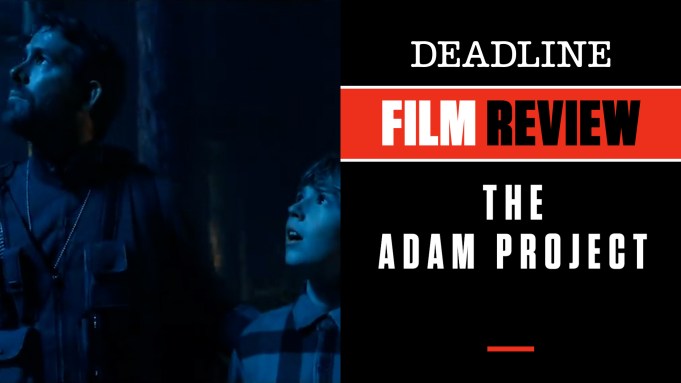 Netflix’s new film has a cool premise, vintage Ryan Reynolds, some excellent CGI action, winning comedy and, best of all — heart. If you have longed for a return to the Amblin style film of the ’80s, when Back to the Future, The Goonies, E.T., Big and others held court, the reteam of director Shawn Levy and his Free Guy star turns a nostalgic format inside out and delivers the goods in The Adam Project.

For me, Free Guy was a miracle, a smart video game movie premise as if directed by Frank Capra and starring Jimmy Stewart. It had all the modern bells and whistles of now but the soul of a warm movie that cared about people and had you feeling great and cheering it in the end. It was a huge success for Levy and Reynolds, and with a quick reteaming for the new time-traveling sci-fi adventure, it has spawned another feel good movie that may even have you shedding a tear or two.

The Adam Project shows why Reynolds is about to overtake Tom Hanks as the most likable star in movies today. Coming off his hit Netflix genre heist film Red Notice, The Adam Project also ought to deservedly explode on the streamer. If it were a more traditional theatrical release, the film undoubtedly would be the same kind of box office success their Free Guy was.

The premise is nifty. Adam (Walker Scobell) is a young kid living a normal kind of life with mom Ellie (Jennifer Garner) after his father (Mark Ruffalo) died. The big moment in his young life happens when he wanders into the garage, where he meets a stranger who, well, turns out to be a thirtysomething Adam. That’s right. Young Adam meets his older self, Big Adam (Reynolds), a pilot from the near future who is on a mission to save the world, as it so happens. And to do that, he must team with his younger self and eventually his late father.

If it sounds convoluted, it really isn’t, and it turns out to be a hell of a fun journey to take. This is in essence a clever variation on a standard buddy movie, if only the pair turned out to be the same person about 20 years apart in age. And the best gag is that the two Adams don’t get along all that well, making it an interesting exploration of what we actually know or like about who we really are. At its center, though, is a movie exploring our relationship with our fathers — the complexity, love and dashed expectations all mixed into the stew.

The plot is pretty straightforward, with Reynolds searching for his own wife, Laura (Zoe Saldana), on a secret mission being pitted against soldiers who when killed basically dissolve into Skittles. It is an amusing if wacky visual touch, and the central plot deals with good vs. evil (Catherine Keener is the villain) in predictable ways. What makes it work is the human element. Young Adam and Big Adam’s individual interactions with their mother from two ages in the life are nice to watch.

Ellie’s titular scene with her husband is even more touching when you realize it also has the bonus value of representing a second screen teaming for Garner and Ruffalo, who were together in the fondly remembered 13 Going on 30 in 2004. And then there’s the key scene of adjusting the time-travel gimmick to take them back to Dad before his death and the revelation of a key clue to saving the world. Adding Laura into the mix gives it all a sweet romantic twist as well.

Levy knows how to turn up the heart without getting cloying. All the actors know exactly the right beats to make this obviously incredulous premise feel possible but, most important, to let us ask questions about our own familiar relationships from a perspective that is unique to say the least. Reynolds never goes over the top, keeping it fun and funny but always humane and real. He has met his acting match in Scobell, marking a memorable film debut from a kid actor who never feels like a kid actor. They have great chemistry.

Garner doesn’t stretch here, but nobody plays warm motherhood better these days. Ruffalo is fine, as is Saldana. Keener has been far more challenged in past roles but nevertheless knows how to get to her inner evil. The climactic battle action is almost too much, but when the film comes back to earth, it all leads to a thoroughly rich conclusion.

Jonathan Tropper, who wrote This Is Where I Leave You — the terrific family dramedy that Levy directed — is the writer here along with T.S. Nowlin, Jennifer Flackett and Mark Levin. Producers are David Ellison, Dana Goldberg, Don Granger, Reynolds and Levy. I for one can’t wait for their third collaboration.

Netflix begins streaming the film it March 11. Check out my video review with scenes from the film at the link above.

Do you plan to see The Adam Project? Let us know what you think.