Continue to Deadline SKIP AD
You will be redirected back to your article in seconds
Skip to main content
January 8, 2020 12:57pm
1Comments 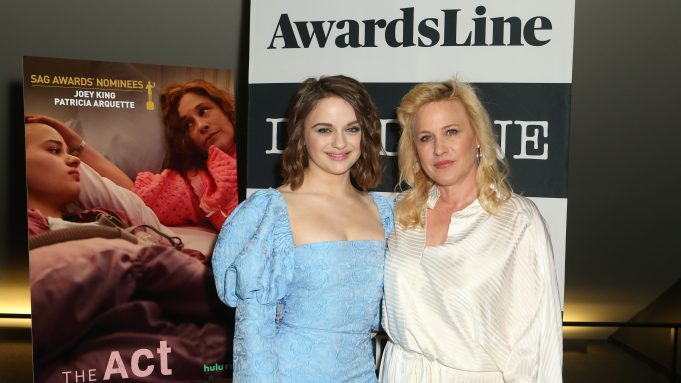 While shooting Hulu’s true-crime series The Act, Joey King relished the opportunity to learn from her Oscar-winning co-star, Patricia Arquette.

Following an Awardsline screening last night of the series’ second episode , the actors appeared for a conversation, during which King spoke in depth about what she’d learned from Arquette. Knowing that her young co-star would be completing her first nude scene during the course of production, Arquette went out of her way to pay forward to King the lessons she’d learned over the years about handling these scenarios—lessons imparted to her when she was younger, by female collaborators working behind the scenes.

“As actors, you pass that knowledge on. ‘Okay, so here’s the deal. We’re going to have no extra monitors; we’re going to have a closed set. We’re going to put a little towel over the lens.’ That stuff…is not something you see on film. But those moments are kind of sacred moments, to be able to be that vulnerable, and [Joey] just totally committed to it,” Arquette said, in praise of her co-star.

“But [it was] because I had you,” King responded. “As much as I wanted to say I was playing it cool, you’d been in that position, having had that experience and those kinds of scenes, and I was so appreciative to how you really just took me under your wing, and really were very adamant about what I should know.”

In terms of lessons taken from her co-star, King said, “The list is long. But that was a pivotal moment in my life, really learning that it’s okay to know your worth and to ask for what you’re comfortable with. And I really thank you for teaching me that.”

Created by Nick Antosca and Michelle Dean—the latter of which wrote the Buzzfeed article on which the series is based—The Act tells the true story of Dee Dee and Gypsy Rose Blanchard, a mother affected by Munchausen by Proxy and the daughter who becomes desperate to escape her.  Told from a young age that she has an innumerable set of illnesses, Gypsy is fiercely guarded by her mother, eventually recognizing that she’s been fed a list of lies about herself all her life, and lashing out in a series of events that lead to Dee Dee’s murder.

The series required transformative work from its stars, and while she would go through a lot while living in Gypsy’s skin—shaving her head, and finding herself perpetually bound to a wheelchair—King enjoyed the experience of taking this kind of role on opposite Arquette.  “Watching [her] just be amazing over the years, and have such an amazing performance in [Escape at] Dannemora, and how well [she] transformed, it was just amazing to know that I was going to be going through a transformative process myself, with someone who was really a master at that,” the actress said.

Heading into The Act, Arquette knew how crucial the casting of her co-star would be, and while she and King hadn’t met prior to the first table read for the series, the actress told Deadline that their chemistry was palpable, from the moment they first sat down together. “So much of the stuff that you see on camera, because of the research and the prep that we did, was birthed in the moment, and I obviously attribute so much of that to [Patricia], how well we worked together, and just being able to take these characters that are real, but add something of our own to them, and create, and be spontaneous,” King added. “It was so rewarding to be able to have that freedom.”

In its March debut, The Act drew instant critical praise. While Arquette won an Emmy and (just days ago) a Golden Globe for her supporting turn, King was also recognized this season with her first nominations at both award shows. On January 19, the actresses will be in competition once again, at the Screen Actors Guild Awards.

For more from our conversation with the stars of The Act, click on the video above.