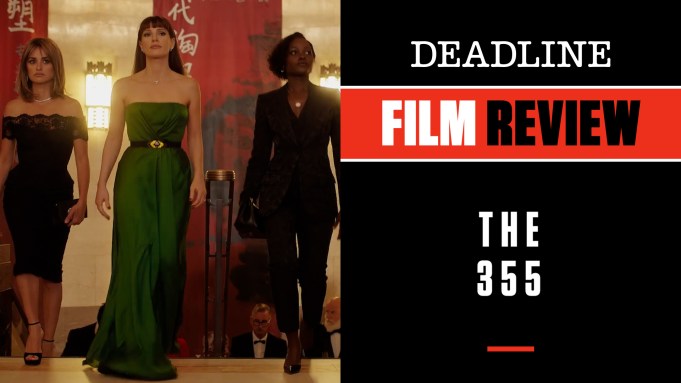 I remember being in Cannes in 2018 as five top female stars announced with great fanfare an action movie project that would reverse the time-honored tradition of almost exclusively male ensemble films in the genre.

The quintet — Jessica Chastain, Penélope Cruz, Lupita Nyong’o, Fan Bingbing and Diane Kruger (who subbed for the originally cast Marion Cotillard, who dropped out) — have delivered on the promise with The 355 and the results are pretty much what we have seen men do for decades. The fault in this by-the-numbers, globetrotting spy adventure does not lie with those stars, but rather a pedestrian script by director Simon Kinberg and Theresa Rebeck (the latter best known for TV procedurals). In other words, it breaks no new ground, though it does deliver the requisite fights and chases and bad guys (literally) that ought to satisfy fans of the genre. Whether men, the most reliable audience for this type of entertainment, rush to box office is another matter.

There can be no question this is a project designed from a well-worn recipe for these things, and one aiming at a global audience since the main stars are from all over the world, and locations range from Paris to Morocco to Shanghai and more exotic locales that Bond, Bourne, the Mission: Impossible gang and others have already traveled.

Actually, the idea was hatched when Chastain and Fan were jurors at the 2017 Cannes Film Festival and Chastain noticed the typical tsunami of posters touting gun-toting men in action movies being sold up and down the Croisette. She decided women should get in on the action, enlisted Kinberg, and helped cook up the concept and casting in order to make the splashy announcement at the very next Cannes. At the time I kind of wondered if it would really get made, but with Universal winning a big bidding war, its time has come as the first major studio release of 2022 — albeit one with far less fanfare upon its opening in theaters on Friday than in its announcement nearly four years ago. Still there is fun to be had here if you don’t think about it too much.

Plot-wise it pretty much follows well-established rules here. Chastain as hotshot CIA agent Mace teams with her male partner and friend Nick (Sebastian Stan) to pose as a honeymooning couple in Paris; they really are undercover to retrieve a lethal device that in the wrong hands could have dire consequences for the world. An unintended switch of backpacks at an outdoor café leads to the opening foot chase of the movie in which Colombian operative Luis (Edgar Ramírez) has landed on the bag with the device and decided he can sell it to the CIA, while German operative Marie Schmidt (Kruger) has her own plans. Mace sets out in the underground Metro after Marie, while Nick tries to catch Luis. All hell breaks loose, Nick is presumed dead, and female bonding begins as Marie and Mace joins forces out of ever-changing circumstances.

Soon Mace recruits old MI6 pal Khadijah (Nyong’o), who now has left her previous life behind for domestic bliss while dabbling in computer hacking. She joins up with them, as well as Colombian psychologist Dr. Graciel Rivera (Cruz), who is enlisted by her government to help in matters but runs into big trouble with some imposing evil men and instructions to “trust no one.” Reluctantly she is sucked into this quintet. But wait, there is a fifth female component with the mysterious occasional ominous appearances: Lin Mi Sheng (Fan), who doesn’t really get into the thick of things until the final act but will soon have her own spotlight.

Meanwhile Nick, left for dead, is very much alive and complicates matters when he turns against his former partner who earlier had even turned their lovey-dovey newlywed act into some genuine romantic feelings. A tony black-tie auction in Shanghai allows our girls to give the glam squad some serious business and is certainly an eye-catching sequence. The final 30 minutes or so ratchet up the tension and action, particularly when the female quintet’s personal lives and loves are really on the line.

None of this breaks any new ground as we have said, and there have been much better films in the genre fronted by kickass women (notably Universal’s own Atomic Blonde with Charlize Theron to name just one), and in terms of gender flipping a normally male vehicle, none did it better or with more style than producer Steven Soderbergh with Ocean’s 8 which flipped the switch on that concept with a clever plot and great female cast. Still, Kinberg handsomely traverses the exciting action sequences with able assists from a skilled group of artisans behind the scenes. Acting-wise, Kruger seems the most natural here, Chastain the most enthusiastic and Fan the most underused. Nyong’o’s character is the most emotional tied with Cruz’s character, who just wants to be back home with hubby and son.

All are way too talented to be caught up in this kind of paycheck stuff, but since men have ruled this particular roost for decades it is actually somewhat satisfying to see these women show they have the chops to do the same exact thing — just not with a first-rate script to go with their on-screen abilities. Maybe next time the material will match level of the cast since it is clearly set up for a sequel (the ending is aces). Bottom line: This is thankfully not as shallow an enterprise as say, Charlie’s Angels, but the potential was there for so much more. Still, there is fun to be had if you check your brain at the box office. The title, by the way, refers to an unknown female operative who delivered secrets involving the Brits in order to help troops under George Washington in the Revolutionary War. Now that could be a hell of a movie.

Check out my video review above with scenes from the movie. Do you plan to see The 355? Let us know what you think.