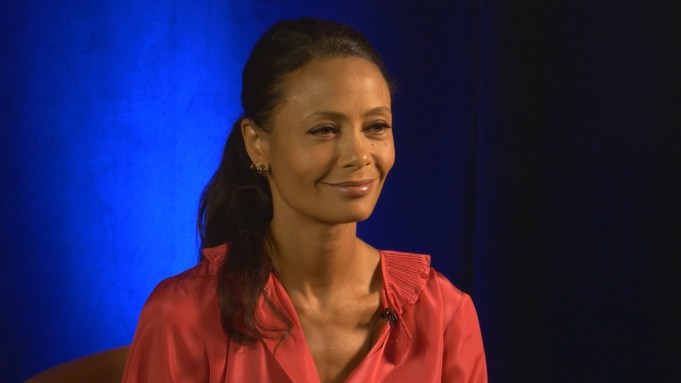 It is a big week for Thandie Newton. Not only does she have a role in Disney/Lucasfilm’s stand-alone Solo: A Star Wars Story, expected to be a juggernaut this coming Memorial Day weekend,  but she also is coming off Sunday’s powerful episode of Westworld in which her “host” character Maeve Millay joins others in entering Shogun World, a place she can’t crack until she starts speaking Japanese.

The episode of the HBO series, in which Newton was Emmy-nominated last season, presented unique challenges for the star who had to learn quickly how to become fluent in Japanese. That was only part of it, since it had to be a particular kind of Japanese, not modern but traditional. For anyone who watched Sunday you realize how flawlessly she pulled it off in the episode that had echoes of a Kurosawa film.

From films like Crash, Jefferson In Paris, Flirting, Mission: Impossible 2, Chronicles of Riddick, W and so many more including the recent Gringo, the London-born Newton has been a fixture on movie screens and now television as well. She recently visited the studios of my Deadline video series The Actor’s Side to talk Westworld, Star Wars and a career in which she clearly enjoys taking on challenges and meeting them brilliantly.

Check out our conversation above. For past episodes of The Actor’s Side, visit our Facebook page.