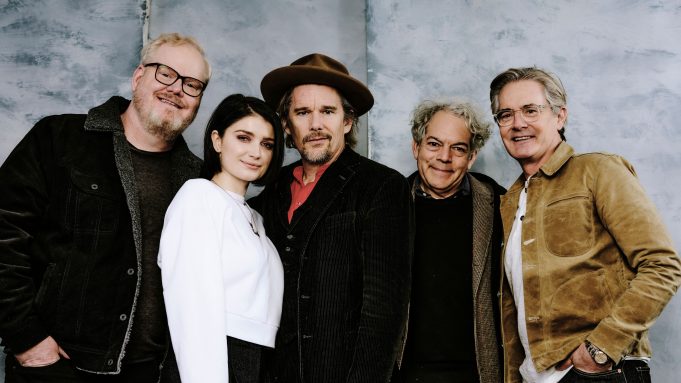 In the early 1980s, director Michael Almereyda penned a script about the brilliant inventor Nikola Tesla, spurred to do so by a close friend’s interest in the figure. But while that script was optioned in 1983, the film was never made.

Flash forward almost 40 years, and Almereyda is in Sundance with Tesla, finally bringing his take on the icon to the screen. “I dusted the script off…It had a lot of dust on it,” the director told Deadline at Sundance, “and we reinvented it for the present moment.”

In the historical drama, Ethan Hawke stars as the titular Tesla, a controversial and complex individual who aspires to change the world with his creations. Frustrated by the greed of fellow inventor Thomas Edison (Kyle MacLachlan), Tesla nonetheless forges ahead with his plans to create the groundbreaking alternate-current motor.

From Almereyda’s perspective, part of what makes Tesla unique—“among all the Tesla projects that didn’t get made”—is a central narrative device it employs. As Anne Morgan—the daughter of J.P. Morgan, and a close associate of Tesla’s—Eve Hewson narrates the story, dissecting it as it unfolds, while lending the period film a modern voice. “It’s almost as if there’s a legacy of unmade Tesla films. David Lynch wanted to do one; a great director named Dušan Makavejev, from the former Yugoslavia, wanted to make one,” Almereyda said. “Anyhow, we ended up making this one, and of course, it’s also very unique because Jim Gaffigan is in it.”

For McLachlan, what made Tesla such a resonant film was that it looked at its subjects not as titans of industry, or long-gone historical figures, but rather, as flesh-and-blood human beings. “These are great characters. These are people that are complex,” the actor said. “The focus of the film is really more about the individuals themselves.”

Noting that he’d been in Sundance in the past for Hamlet—another film by Almereyda, in which he’d starred opposite MacLachlan—Hawke found Tesla to be “a great match of director and subject matter,” he said, joining Almereyda, MacLachlan, Hewson and Gaffigan at Deadline’s Sundance Studio.

At the same time, he admitted, he couldn’t help but be frustrated by MacLachlan, while shooting the film. “I personally find it insulting and upsetting, how good Kyle is in the movie. I find it really irritating, and I know for a fact that Tesla would find it irritating,” the actor joked. “Because Edison is supposed to be diminished, in a movie about Tesla. You’re not supposed to steal the freaking movie.”

Following its premiere in Park City earlier this week, Tesla claimed the Alfred P. Sloan Prize—an award which Almereyda had won once before, with his 2017 film, Marjorie Prime. For more from our freewheeling conversation with the director and stars of the film, click on the video above.