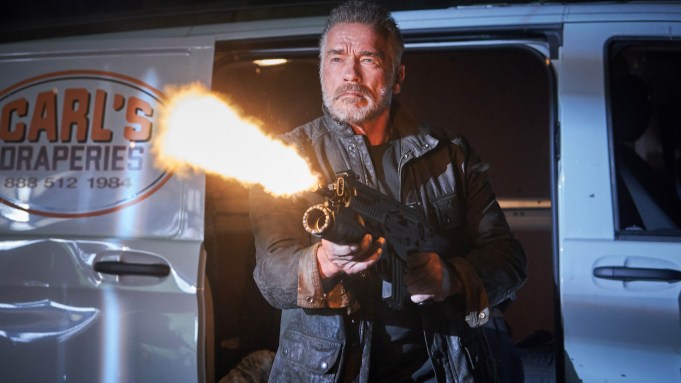 Paramount, Skydance and 2oth Century Fox have unveiled a new trailer for Terminator: Dark Fate, which returns the iconic franchise to its roots with Jim Cameron producing, Arnold Schwarzenegger and Linda Hamilton starring, and the rating decidedly R.

The latest look at the pic, directed by Deadpool‘s Tim Miller, comes on August 29, which is Judgment Day in Terminator lore — the day (in 1997) when Skynet became self-aware, launching the cyborg apocalypse that Hamilton’s Sarah Conner has been trying to stop for decades. Expect plenty of noise throughout Friday about the 8/29 significance (like this):

The Dark Fate story picks up where Cameron left off with 1991’s Terminator 2, and as he told Deadline’s Geoff Boucher today, the time-travel aspects of the new story has been used to effectively erase the events depicted in the three previous installments. The new trailer show’s Conner protecting the world again with the help of her onetime nemesis — and now, reluctantly again, her ally — played by Schwarzenegger.

“When this is all over,” she tells him at one point in the trailer, “I am going to kill you.” Replies The Terminator: “I understand.”

Dark Fate‘s own judgment day is November 1, when it hits theaters.

Mackenzie Davis plays the new and improved (and human) version of the perfect killing machine, co-starring with Natalia Reyes, Gabriel Luna and Diego Boneta and the bad robot. The screenplay hails from David Goyer & Justin Rhodes and Billy Ray, with story by Cameron & Charles Eglee & Josh Friedman and Goyer & Rhodes.