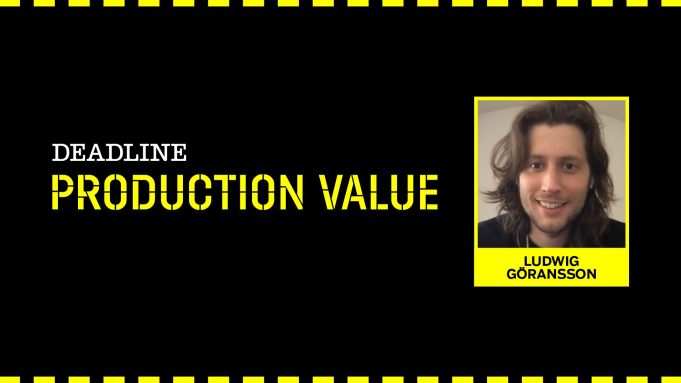 When composer Ludwig Göransson was approached for Tenet, he jumped at the chance to experiment with “nerdy” ideas and techniques, in concert with a director he’d long admired.

“Reading the script, I was just so excited to be in that room, and to be able to possibly work with Christopher Nolan,” he says, in the latest installment of Deadline’s Production Value video series. “In every kind of field, you would be excited to work with him. But also, what he’s done, and what [composer Hans] Zimmer and Christopher Nolan did together, and how they shaped and influenced 20 years of cinema is crazy.”

Landing Göransson a Golden Globe nomination for Best Original Score, Tenet centers on the Protagonist (John David Washington), a secret agent who must learn to manipulate time, in order to prevent an attack from the future that would destroy his present world.

While working on the sci-fi thriller, the composer looked “to get an insight” into the mind of a visionary, who has carved out his own distinct space as a big-budget storyteller. His understanding of Nolan, and the director’s approach to music, crystallized in an early meeting. “I remember…going really into details about different production ideas, and sound manipulation techniques that the script gave me ideas about,” he shares. “I was a little surprised how much we nerded out about those little ideas and techniques, but it was a really fun meeting.”

The ideas that Göransson first pitched to Nolan stemmed from his interest in the unique environments presented in the script. “Tenet takes place in seven different countries, [on] three different continents, so there’s a lot going on,” he says. “But I remember reading about this place with the windmills, and then there was a heist on a fire truck.”

The latter set piece led the composer to think about working with frequencies similar to those emitted by a fire truck. “[I envisioned] a really heavy fire engine rumble as a bass track, and then something on top of that, that would symbolize fire alarms, using manipulation like side-chaining,” he explains. “I brought [that] up with Chris, and Chris was like, ‘Yeah, let’s dig deeper into that.’”

Of course, give the exploration of time—and temporal “inversion”—in the story Nolan was telling, Göransson would also explore methods of tapping into this concept through music. “Obviously, inversion is…such a big idea, and there’s so many different ways of inverting music,” he says. “You know, Bach inverted music, and there’s different composing techniques that I learned in school on how to invert music, just doing it on the sheet [music], taking a piece of melody, and then writing it backwards.”

While the composer embraced this approach at times, he also looked at methods made possible by today’s technology. “With computers, you can also just take an audio file, put it into Pro Tools, press a reverse button and it flips,” he says.

As he contemplated how to grapple with scenes where people were moving forwards in backwards in time—at the same time—Göransson also tinkered with bringing inversion onto the scoring stage. “Something that’s really interesting to me was, how can you make a live player sound like they’re playing in reverse? Audio-wise, that’s impossible, but you can manipulate it,” he notes. “There’s different techniques—how you can record them, reverse it in the computer, make a player listen to it and try to emulate that, record it again, and reverse it again in the computer.”

While exploring all avenues in the area of “retrograde composition” was laborious, Göransson was fortunate that in the scoring process, time was on his side. “Me and Chris worked together on this for one and a half years,” he says, “so we had a lot of time to experiment.”

In terms of instrumentation, Tenet‘s score comprised an epic combination of orchestral and electronic sounds. While the story at hand spanned the globe, the composer never considered selecting regionally specific instruments, to reflect the geography of a given scene. In this respect, he felt, the imagery offered up by Nolan painted a complete picture. For Göransson’s part, “it was more about making the music feel like you’re in the Protagonist’s head,” he says. “You’re in his mind; you’re on his journey.”

An aspect to the score the composer enjoys is the fact that it holds its cards close to the vest. “A lot of times in the movie, you think you know what you hear, but you don’t,” he says. “It’s a lot of sounds that are heavily manipulated, and when they clash together, backwards and forwards at the same time, they all blend in and create this new kind of texture that you can’t really put your finger on.”

Ultimately, Göransson’s score for the film fully reflects the vision he set out with, following his early conversations with Nolan. At the same time, though, it would come to be shaped to a degree by the period in which it was brought to life.

By the time the coronavirus pandemic hit the United States last year, leading to the closure of music studios, Göransson had completed around 70% of his work. But when the composer was sent home, he would have to figure out how to complete the remaining 30%, with some 70 musicians recording their individual parts from home. “We had just had a baby, and I moved my studio into my bedroom, and we moved the bedroom into the living room,” he shares. “We were sleeping in the living room, which is next to the bedroom, and I like to work pretty loud, so it was a lot of sounds in the house going on.”

Admittedly, the music that came out of the process that followed “wasn’t a traditional orchestral sound,” Göransson says, “because normally, you hear that they’re sitting in a room and playing it together.

“It’s almost like a human body,” he adds. “It all works together.”

With musicians playing separately, from their living rooms, “you get all these different sounds, different noises, different echoes, and everyone’s playing in their own style, not following everyone else,” Göransson explains.

But while the sound produced in this scenario was different, from Göransson’s perspective, it actually worked in favor of the final score. “It sounded strange. It sounded like it was recorded in a different world,” he says. “I mean, it was a different world, if you think about it. But it fit the tone and sound of the score really well.”

First dabbling with the guitar at age six, Göransson’s path into film and TV composing was unique. From an outside perspective, it feels like one that he was almost predestined to journey down.

Growing up in Sweden, he was heavily influenced by his father Tomas, a guitar teacher and lifelong musician. “He started out as a classical guitar player,” the composer says, “but then transitioned into blues, and playing electric guitar.” While it was his father’s idea to name him Albert—after his favorite guitar player, Albert King—Göransson would ultimately be given the name Ludwig, in homage to the German composer and pianist, Ludwig van Beethoven.

As a child, he would spend 10 to 15 minutes a day playing “little blues songs” with his dad—but it was when he heard the song “Enter Sandman” by heavy metal band Metallica that his life changed for good. “I think my dad was learning [the song] for his students, and I remember going down to his studio in the basement, hearing this loud music and just being knocked to the floor like, ‘What is this?’” he says. “When I heard it, I was floored because of the impact of the music. That’s [when] I knew, ‘Oh, I want to do music for the rest of my life.’”

A multi-instrumentalist noted for the diverse assortment of sounds he’s been able to create, Göransson went on to earn degrees from the Stockholm Royal College of Music and the University of Southern California. But while his experiences at these institutions were influential, his early years in Sweden’s public school system shaped him just as much. “Basically, you can put your kid into the public music school and choose different instruments. So, I had piano, saxophone, drums, guitar different days of the week,” he says. “I just took the bike to school and learned to play.”

Later, at USC, Göransson would connect with an up-and-coming filmmaker named Ryan Coogler. Developing a strong friendship, the pair would go on to collaborate on such acclaimed features as Fruitvale Station, Creed and Black Panther.

After college, he would strike up yet another life-changing connection with composer Theodore Shapiro, while working as his assistant. “It was such a great environment to be around, and I was very lucky to have such a great mentor,” he says. “Because the way Teddy showed me how to think about music, [and] how it works with picture, was the best training for me.”

It was Shapiro who would help Göransson land his first professional gig, as the composer for NBC comedy, Community. His experience working on the show ended up being one of the most exciting of his life. “I remember [feeling] like, ‘Okay, well I have a full-time job now,'” he says. “‘I’m going to focus all the hours in the day to make the best music possible for this TV show that I love.'”

While Community would lead to other major scoring opportunities, it also introduced Göransson to Donald Glover (otherwise known as Childish Gambino), an actor and musician for whom he would produce a series of hit albums.

Throughout his career, Göransson’s approach as a composer has evolved, based on what he’s learned from collaborators like Glover and Coogler. “Something that Ryan was adamant about, which I never really thought about, was how sound is so important, and how we can combine sound and music….creating a sound world where we take real sounds from the movie, and turn those into music,” he says. “Things like that, that we started on very early, really influenced the way I work.”

Becoming a through line in all of the films Göransson tackled with Coogler, this approach to music perhaps played a role in his first Oscar win for Black Panther in 2019. In the end, it actually carried all the way through to Tenet, resonating very much with Nolan, who was known for approaching films the same way. “I remember seeing Batman Begins in Stockholm. That was the first time I’d been in a theater, feeling like I’m part of an event, and now, I understand that you really create your own worlds,” Göransson says. “I think how we can use sound today, in sound design and music, and combine the two, and manipulate, that’s really a way where you can shock the audience, but also give the audience new experiences.”

With Emmy, Grammy and Oscar wins behind him, the composer is now very close to earning the coveted EGOT distinction. But for now, his drive is simply to continue collaborating with artists that inspire him, and that motivate him to continue learning. “I feel like I want to get better, and as long as I have that desire, it’s still fun,” he says. “When you work with great minds, they’ll challenge you, and you can challenge them.”

For more from our conversation with Göransson, check out the video above.