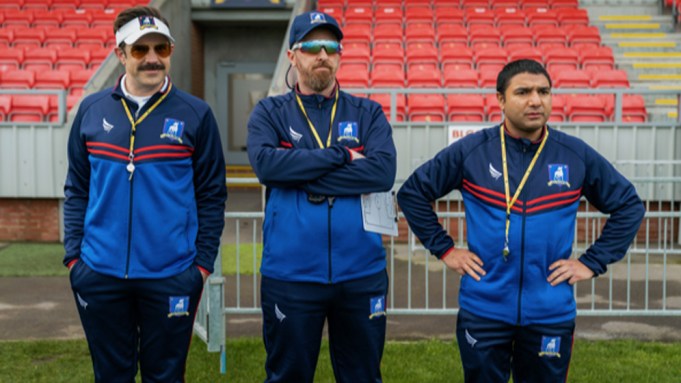 Apple TV+ has released what it calls the “official” trailer for Season 2 of Ted Lasso, its soccer comedy starring Jason Sudeikis. The streamer unveiled a first trailer in April, along with the July 23 premiere date.

The series stars Sudeikis as Ted Lasso, a small-time college football coach from Kansas hired to lead a pro soccer team in England despite having no experience coaching the sport. In the new season — which Apple notes is “more exciting than Higgins at an open-mic jazz club” — the Lasso-coached AFC Richmond meets their skipper’s angry, table-tipping alter ego Led Tasso as they work through relegation from the Premier League.

Sudeikis won the SAG Award for Male Actor in a Comedy Series for his title role. Its cast was nominated in the Ensemble category, the show won Writers Guild Awards for Comedy Series and New Series, and it swept every category for which it was nominated at the Critics Choice Awards.

Have a look at the Season 2 trailer — which is interspersed with the Queen & David Bowie classic “Under Pressure,” after Queen’s “We Will Rock You” was featured in the first trailer — above.