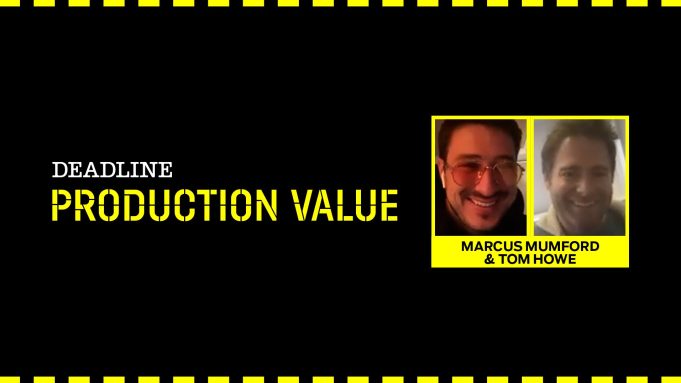 When Marcus Mumford got the call to pen his first TV score with Ted Lasso, he didn’t answer — at least, not immediately.

The Grammy award winner, known as the lead singer of the chart-topping folk rock band Mumford and Sons, was first approached for the project by a friend. “Jason Sudeikis left me one of his infamously long and rambling voice messages. He’s unbelievable at that,” he jokes. “It was on my U.S. phone, which I turn off when I get home [to the UK]. So, I ignored it for three months, accidentally.”

By the time he discovered the voicemail, the Apple TV+ comedy series was entering production. But this didn’t stop him from pursuing the gig. “I ended up going to set,” Mumford recalls. “They were already shooting, and [Jason and I] talked a lot about the clarinet. I’m not quite sure why.”

Subsequently, he had a chat with co-creator Bill Lawrence, expressing his excitement about the project, and asking if there was someone he might recommend, as a composing partner. “I just knew that I would rather collaborate,” Mumford says, “than sit in a hole on my own and do it.”

Lawrence recommended prolific composer Tom Howe (The Great British Bakeoff, A Shaun the Sheep Movie: Farmageddon), with whom he’d collaborated on the ABC series Whiskey Cavalier, and the rest is history. “Bill said, ‘Tom is the man,’ and he was right,” notes Mumford. “It was sort of like a match made in heaven.”

In the first installment of the Production Value video series for Emmy season 2021, Mumford and Howe break down their collaboration on Ted Lasso, a massive hit which debuted amidst the Covid-19 pandemic, offering joy and hope to people around the world when there was little to be found.

The heartfelt comedy, developed by Lawrence, Sudeikis, Brendan Hunt and Joe Kelly, centers on Ted Lasso (Sudeikis), an American football coach who heads to the UK to manage an elite British football team, with no prior exposure to the sport.

Coming to the project, Mumford had seen the Premier League promos featuring Sudeikis’ Lasso character, which inspired the series. “It felt like if I was going to do music for a TV show, this would be it,” he says. “If I wrote down my dream TV show, it would probably be a comedy about football.”

Ultimately, though, for both Mumford and Howe, enthusiasm about the project was sustained by “the feeling” it offers up.

“The more I knew about it, it honestly felt like a unique show to me…because it had…real optimism to it,” says Mumford. “I’m not a very good cynic, and…knowing Jason as I do, despite not being in denial about the realities of life, he’s determined to see the bright side, like his Lasso character. And that really appealed to me.”

For Mumford, the series’ “transatlantic” quality was also interesting, given the fact that he himself holds dual citizenship between the U.S. and the UK, having been born in California and raised in England. “I’ve spent as much time [in the States] as I have anywhere else in the world, and so I feel quite transatlantic,” he says. “Given that it was a transatlantic show, it felt really up my alley.”

Mumford and Howe set out to compose the Ted Lasso score in February of 2020, just before the outbreak of the Covid-19 pandemic. “At the beginning, I went to Marcus’s house and we spent 10 days writing together,” says Howe. “At that point, we didn’t have much picture, if any. It was more like making a record.”

The first task the pair handled, as collaborators, was writing the show’s memorable main title theme. “All of our references were somewhere in the middle of the Atlantic. We listened to Gerry and the Pacemakers, I think we listened to Talk Talk, we listened to a lot of Creedence [Clearwater Revival],” Mumford says. “It felt like it should be a sort of uplifting, but still fairly introspective song for the theme.”

Interestingly, the theme came together within days, which is quite unusual, in Howe’s experience. “Normally on a TV show or a film, the titles is the bit that I’m scared about, and try and do last,” he admits. “But we went at it first, and actually, having that first, it was a really nice platform to go from, to have a bit of DNA going into the show. It sort of established the sound right off the bat.”

“It felt like a statement of intent,” adds Mumford. “I was glad we did it first because I think it helped us sort of pitch our tent, in terms of focusing on organic sounds, and having a sonic palette for the show that was transatlantic—that had organic instruments in it, some acoustic instruments in it, but also had some of the weight of ’70s drum sounds.”

Given their decision to go with an organic sound, Mumford and Howe ended up playing all of the instruments on the score themselves—with the exception of the piano, which was played by Reuben James.

An interesting aspect of the process, once lockdown began, was that Mumford lost his sound engineer, and therefore needed to get more acquainted with the technical side of production. “I’m not very good at computers,” he says. “I’ve got a studio at home and it’s all in one room, and I’m lucky to have plenty of gear, but I didn’t know how much of it worked—until March of last year, when I was locked down, and had to suddenly learn what all these knobs did, which ended up being really fun.”

While Ted Lasso came out of nowhere to become a bona fide sensation, one of the most meaningful aspects of the composers’ experience of the show has to do with its creators, who have embodied in real life the spirit of generosity with which they’d imbued their characters. Prior to the outbreak of the pandemic, Mumford was asked to record a cover of Gerry & The Pacemakers’ “You’ll Never Walk Alone.” After the outbreak, he asked Sudeikis to help him to release the song, with cooperation from the record label that owned the rights, with all proceeds going to charity. “Of course, Jason came straight back and was like, ‘That’s exactly what we should do,’” Mumford says. “The moral imagination, or at least the empathy he was able to show, I think for me epitomizes what’s at the heart of the show.”

In conversation with Deadline, Mumford and Howe also touched on their earliest explorations of music, the first albums they ever bought, and their big breaks as musicians. Both composers played multiple instruments from an early age, were surrounded by church music, and grew up with an interest in bands. “My dad used to buy a record every week,” Howe shares. [Music] was definitely an important part of my household.”

One of Mumford’s earliest creative outlets was a jazz band, which he began playing in around the age of 12. “That’s how we made our money on the weekends, playing at weddings and 40th birthdays. I was the drummer in the band and have always approached most instruments I’ve tried to play like they’re a drum kit, just playing as hard as possible,” he explains. “Then, I started playing the guitar when I was like 15 and was rubbish at it—and still am, really—and then discovered open tunings, which changed my life, when I was about 18. I was living in Colorado and someone showed me some flatpicking styles, and away I went.”

While Bob Dylan was an early influence for Howe, some of the first albums he ever bought were by David Bowie. “The first album that had a real impact on me was…Let’s Dance. I remember my dad putting that on and cranking it up, and it just a really different kind of sound,” Howe says. “Then, I obviously went back and listened to all the others, like Hunky Dory, and just the songwriting and musicianship was ridiculous.”

The first records Mumford bought were The Miseducation of Lauryn Hill and Miles Davis’ Kind of Blue. “Then, I swiftly moved on to Pure Shores by All Saints, and spent a lot of time with Jurassic 5 as a teenager—and then I discovered Dylan,” he laughed. “That’s what you want me to say.”

Howe’s big break as an artist came when he scored a BBC show for “next to nothing,” after its original composer was fired late in the game. In just 10 days, he needed to pen around an hour and a half of music, and the challenge paid off. “I kept the publishing, so I was able to then get a publishing deal,” he says. “That put me in a company with people who were a lot better than me, and enabled me to go on and do the next job.”

Mumford’s professional career started when he was around 19. While playing at open mic nights in London, he met artists including Noah and the Whale and Laura Marling. “The lineups for the bands would change every night,” he recalls, “and we’d all play with each other all the time, and there was a real communal spirit to it.”

While writing his own songs early on, Mumford played drums as a session player for Marling. “At the end of her shows, she’d invite me up to play,” he shares. “We’d have a big, old jam, basically, at the end of our shows, which—fair play to her—was a generous thing to do.”

Eventually, he connected with Winston Marshall, Ben Lovett and Ted Dwane and formed Mumford and Sons, which took the world by storm around 2009. “It felt like the music we were playing was sort of unique to us…especially when we sang together,” he shares. “We suddenly found ourselves in a band, basically, just because we were making a noise that felt unique to the four people that were in the room.”

Mumford says collaboration has always been the best part of the work he does. “That spirit of collaboration really has lasted my whole career, and it’s probably my favorite thing about playing music, to be honest,” he says. “That’s why I’ve so loved working with Tom.”

“We’re so lucky to do this,” adds Howe. “The thing about working on TV and film is that you’re part of a wider team. It’s about making one great thing and being a part of that, and that, to me, is what I enjoy about it.”

Ted Lasso Season 2 premieres on Apple TV+ on July 23. A third season has already been ordered.

To check out our conversation with Mumford and Howe, click above.