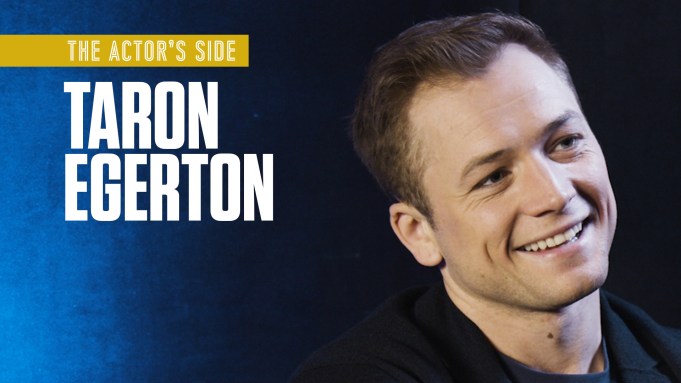 With Rocketman, Taron Egerton got the role of a lifetime — or at least so far for this young actor, who already has made a big cinematic splash in the Kingsman movies, as well as another true-life role as Olympics ski-jumping phenomenon Eddie the Eagle.

But the latter was a long way from who he plays in Rocketman — Elton John — in a complex, honest and stunning turn in which, takings risks of risks, also performs the musical legend’s songs and even joins John on a duet of the new song written for the film’s end credits, “(I’m Gonna) Love Me Again.” We talked about all this and more when Egerton visited our Deadline studios for this week’s edition of my video series The Actor’s Side. Egerton discusses the fact that this film and role differ from typical showbiz biopics in that it was structured as a musical and that meant singing, dancing, the whole nine yards.

He credits Sir Elton himself for being enormously supportive and helpful in the process but cringes at the thought that should “(I’m Gonna) Love Me Again” — penned for the film by John and longtime writing partner Bernie Taupin — get nominated for an Oscar, he would be asked to re-create the duet in front of a billion viewers.

However Egerton is becoming quite the musical star and also talks about playing Johnny Gorilla in the animated film Sing, in which he also happened to perform an Elton John tune. He also talks about the upcoming Sing sequel and relives his early days at the Royal Academy (where, believe it or not, he also auditioned singing an Elton John song) and on the London Stage.

Egerton also talks about knowing Kingsman was absolutely the role he had to play from the first moment he was asked to read a couple of scenes. There is all this and so much more in our conversation which you can watch by clicking the link above.