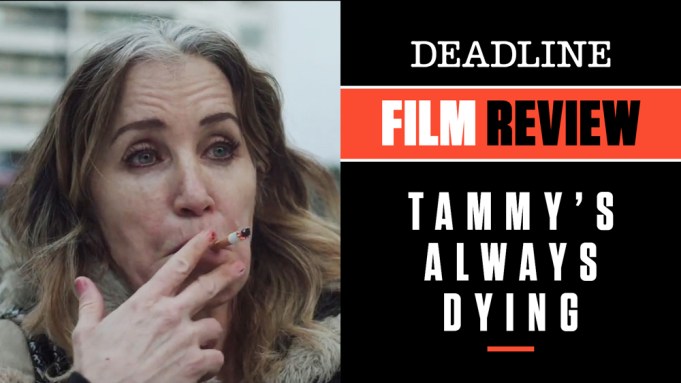 Around the same exact time in September that Felicity Huffman was being handed a two-week prison sentence for her part in the college admissions scandals that enveloped so many parents last year, her latest independent feature was premiering at the Toronto International Film Festival. The debut was a bit overshadowed by real events for her so obviously she wasn’t able to attend, but now it will be out there for all to see as Tammy’s Always Dying hits Video On Demand this Friday.

This is the right way to go for this modest indie (it would get buried theatrically), which focuses on the toxic relationship between Huffman’s Tammy, a narcissistic alcoholic mother, and her beleaguered daughter Cathy (Anastasia Phillips). Like clockwork, every single month after the welfare checks run out, Tammy in a grab for attention from Cathy goes to the same spot on the same bridge and threatens to jump. This melodramatic ritual always ends with Cathy showing up to “save” her, and of course she never jumps. So then it is back to the squalid depressing surroundings in which the woman lives.

For her day job Cathy is a bartender, while also involved in a dead-end sexual relationship with a married jerk. She does have a strong human connection with her boss Doug (Clark Johnson) that helps her get through the tough times but life gets even more challenging when she is forced to go back home and take care of Tammy after her mother is diagnosed with Stage IV liver cancer. What seems dire actually stretches out as Tammy can’t seem to die, and keeps hanging on improving. In a weird subplot telegraphed by the fact that this show is always on in the background, Cathy manages to get herself booked on “The Gordon Baker Show”,  a Dr. Phil/Maury Povich type program that preys on the tragic lives of its guests and their sad stories. Cathy’s plan is to go on and talk about her mother’s death (yes, the one that hasn’t happened) and decides to do it anyway, announcing to the world that her mom committed suicide. That nobody notices pretty much says it all. This little episode is done and then basically dropped storywise so it seems pointless to me, except as a way to open things up away from the day to day humdrum existence of mother and daughter. The screenplay by newcomer Joanne Sarazen doesn’t seem able to really go beyond the surface with either of them, and in fact Tammy is all show, with little explanation of how she got there and the origin of her problems with Cathy. The tone is off, as the movie isn’t sure it is domestic drama or dark comedy at times.

It is certainly not the fault of our stars, both totally game to play. Huffman has the meatier role and gives it all she’s got, which is considerable for the Emmy and Golden Globe winner and Oscar-nominated actress. Tammy is a showy part to be sure and looks like awards bait for next year’s Indie Spirits. At the very least, it is a further reminder, if you ever had any doubt, she is a hell of an actor. So too is Phillips, who says it all with her sad sack looks, a person who can’t seem to crawl out of a dismal life spiral, try hard as she might. She’s excellent.

Jessica Adams is the producer. Amy Jo Johnson is the director, an actress turned helmer who does a decent enough job in her second outing behind the camera, at least in giving a platform to some talented performers in this low budget enterprise. Quiver Distribution releases it Friday on VOD and digital platforms. The filmmakers and cast plan a virtual premiere via Zoom that night, including a Q&A which won’t include Huffman who is “involved in community service” and won’t be participating, according to the publicist for the film. Check out my video review with scenes from the film at the link above.

Do you plan to see Tammy’s Always Dying? Let us know what you think.