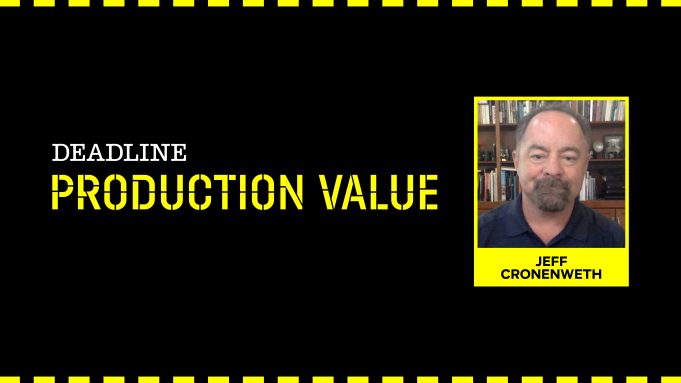 Brought on board the pilot of Amazon Prime Video’s Tales from the Loop, cinematographer Jeff Cronenweth was tasked with cultivating the series’ visual language, while weathering extreme temperatures and other major challenges.

A two-time Oscar nominee most closely associated with the films of David Fincher—including Fight Club, The Social Network and The Girl with the Dragon Tattoo—Cronenweth came to the project via another of his longtime collaborators, director and executive producer Mark Romanek.

“When Mark called me for Tales from the Loop, I was very excited about the opportunity,” the DP says, in the latest installment of Deadline’s Production Value video series. “Mark and I have a long history; we go back to the heyday of music videos and commercials, and then I shot One Hour Photo with him.”

Created by Nathaniel Halpern, the sci-fi drama explores the interconnected lives of townspeople living above “The Loop,” a machine built in small-town Ohio that was designed to tap into the mysteries of the universe.

In his process as a DP, Cronenweth feels it’s important to approach material with an open mind, and without too many preconceptions, allowing a world to emerge through conversations with the director involved. “From there,” he says, “you can build the visual language, bring your ideas to it, make things better and grow.”

For the artists behind Tales from the Loop, a primary visual reference point was the retrofuturistic imagery of Swedish artist Simon Stålenhag, featured in his art book of the same name. But when Cronenweth and Romanek first discussed the series, they hit upon a set of references all their own. “We worked through the tempo, the pace, and the storylines, and how best to embrace that, and it all arrived at this very Scandinavian-tempoed piece. By that, I mean shots that last a little longer, light that felt more organic, and motivated by practicals or windows,” the DP explains. “So, we started reviewing and remembering some of our favorite directors and films in that genre. Names like Bergman and Tchaikovsky and Kowalski all came up.”

Set against a wintry, pastoral backdrop, pilot episode “Loop” would be shot up in Canada. The locations involved would inform both Cronenweth’s approach to the episode, as well as the major hurdles he would have to overcome. “We found wonderful locations in Winnipeg, with lots and lots of snow, which was really important for our episode. The landscape and topography was really stunning—very broad, open fields of snow, lots of trees, farmhouses, and a great, small town. So, that’s where we settled on the location to shoot,” he says. “But in that, it brought several challenges—the quality of light, the length of days, and the temperature, which was below -30 Fahrenheit.”

The environmental challenges of the pilot were compounded by the fact that child actors factored into 90% of its scenes. “The kids could only be on set for a certain amount of time, and then you add in the temperatures that we were working in, and you have to give time for people to get warm and be safe. So, our days were limited, and then an extra burden was that there was a dozen scenes that take place at night,” Cronenweth says. “So, nighttime in the winter, in the cold, and with the restrictions of the time the kids could be on set, proved to be a huge obstacle.”

Thinking at length about his approach to these nighttime shoots, the DP embarked on a series of location scouts during prep, only to hit upon a beautiful realization. In pursuit of cinematic exterior shots, crews often shoot either shortly before sunrise, or shortly after sunset, in a window called “magic hour.” And while this window is typically a fleeting 20 or 30 minutes long, in Winnipeg, it lasted for about an hour. “So, I approached Mark with the notion that we do all of our night stuff in the rich, cool, blue dusk of winter evenings in the north,” he says. “What that meant is that we’d have to block out, rehearse, stage multiple cameras, in multiple directions, to accomplish the scenes that we were trying to accomplish in that window.”

The first time Cronenweth attempted a night shoot for Tales, he lost confidence that he’d be able to capture what he needed within this hour-long time frame. “So, we had all of the traditional night exterior condors with lamps, lighting the forest, and equipment on the ground, all cabled out and blocked out. We rehearsed, blocked, and then when the light was right, we shot—[and] we actually finished earlier,” he shares. “It was quite beautiful, mesmerizing. It gave us a lot of depth in the sky; it gave that silhouette and brought out the trees, so they didn’t disappear into the sky.”

Officially embarking on a career as a cinematographer in the 1980s, after graduating from the USC School of Cinematic Arts, Cronenweth fell in love with his craft at a very early age. The son of Jordan Cronenweth—one of the most influential cinematographers in motion picture history, “who photographed the original Blade Runner, amongst many, many other movies”—Jeff visited sets as much as he could as a kid. “[I] fell in love with the process. I loved the camaraderie,” he says. “I loved the idea that a team went out to overcome each day’s obstacles, and then bring back amazing visuals.”

Working on set alongside his father for a number of years, beginning in high school, Cronenweth gradually climbed up the camera department ranks—from camera loader, to second assistant camera, to first assistant camera, to camera operator—honing the skills that would serve him, in cultivating his own stellar body of work.

“We used to do this thing…After we wrapped, I’d always wait an hour or two, and I’d get a phone call from him. Even as the master that he was, when you’re pushing the envelope and breaking boundaries, there’s an inherent fear of going too far—and this was with film, so the margin of error was very, very small,” Cronenweth shares. “So, I always used to joke and call it the ‘Exposure Trauma Phone Call.’ It was just him talking with me about what we had photographed that day, and what our confidence level is that we had not gone too far.

“That was very humbling, and a great education for me,” the cinematographer adds, “that as long as you are pushing boundaries, there are no certainties. But that never inhibited him from doing the same thing the next day.”

While Jordan Cronenweth passed away in 1996, at the age of 61, the younger Cronenweth will never forget the lessons he learned from his father. “I tried to model myself after him, in the sense that risks that are worth taking, [you should] take,” he says. “[You] embrace fear because it keeps you on edge, and on point, and progressive.”

As Cronenweth explains, his philosophies on light and composition also were modeled on those of his father, after spending so much time with him on set, and in conversation about the passion they shared. “It’s all about the story, and we’re there to enhance that experience,” he says, “to give a better, more believable situation for actors to perform in, light that enhances moods and creates mystery when necessary, and all of those wonderful things that we can bring to the screen.

“The biggest challenge, all the time, seems to be not getting in the way of that. It’s very easy to overdo things, and to pull out a lot of tricks, and to make things sensational,” he adds. “If done in the right kind of climate, that’s a wonderful thing; if not, then it can take away from the story itself or the characters.”

After so many years on set, Cronenweth is still in love with his job, for the way in which it keeps his creative mind at work. “Even though you think you’ve got something down, there are so many obstacles and challenges that arrive every day that it keeps you on your toes,” he says, “and you are always trying to scramble to find solutions to challenges that come up.”

To take a look at our conversation with the renowned cinematographer, click on the video above.