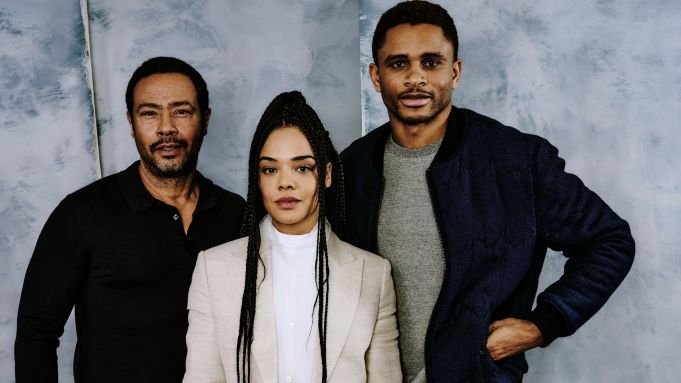 Sylvie’s Love, the music-infused period drama from writer/director Eugene Ashe, is a 60s black love story centered around an aspiring television producer and a talented musician who meet up again years after their summer romance ended.

Tessa Thompson and Nnamdi Asomugha star as Sylvie and Robert, respectively, the former couple who reconnects several years later and find that their feelings for each other have never disappeared.

“What is not done much is to center our joy, to center to our beauty, to center to our elegance,” said Thompson, who was accompanied by Ashe and Asomugha at Deadline’s Sundance Studio. I”n film history and film iconography, there’s a rich precedent for love stories that span generations, films like The Way We Were. But they’re pretty exclusive of black and Brown people,” she continued.

“The idea of getting to, in a way, make a film that feels sort of like a throwback to that time, that feels revisionist in a way, it’s like, ‘what if it was okay in that time and in place to make films like those films that center us and center us in a time when yes, there was strife that had to do with race and gender, as there still is, but what you get to see these characters struggle with is the interpersonal strife of just trying to love and be alive.”

“None of us would be here if people weren’t falling in love, if black folks weren’t falling in love in the 60s, said Ashe. “I can’t even really think of a period piece where it’s not filtered through the lens of our adversity. This isn’t about that. This is 1962. There is certainly the civil rights movement happening, but it’s really about the love story between these two people.”