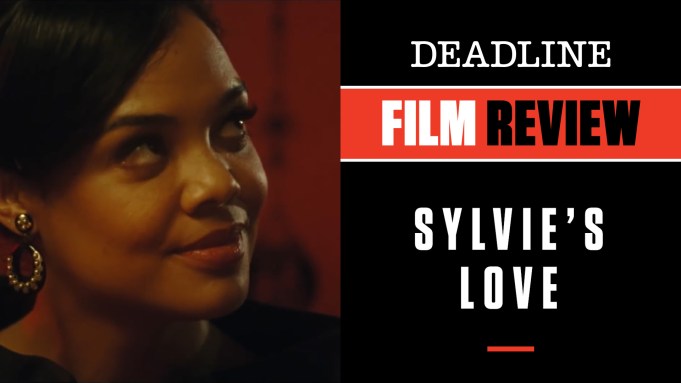 In some ways, Amazon Studios’ Sundance Film Festival pickup, Sylvie’s Love looks like it actually could have been made in the late-1950s/early-’60s period in which it is set.

Shot like many a Hollywood so-called “woman’s picture” that were made at the time, this film from writer-director Eugene Ashe has a real spirit of romanticism and lush production values that were prevalent in the films of such directors as Douglas Sirk and Jean Negulesco in the ’50s. That’s the time frame Ashe has selected to tell the bittersweet love story of Sylvie (Tessa Thompson), a young woman who works in her father’s record store while harboring ambitions for a career as a TV executive, and Robert (Nnamdi Asomugha), a musician she meets when he takes a part-time job in the shop circa 1957.

Their story is chronicled through its ups and downs over a few years and actually begins with a sort of The Way We Were motif, where we are introduced to each of them in 1962 as Sylvie waits for a friend in front of a theater and Robert — who she hasn’t seen in years — happens to walk by after a recording session down the street. The bittersweet reunion then flashes back to the heart of the romance between the pair. \

The big difference between this film, an official selection of the 2020 Sundance Film Festival, and those made during the time it depicts is that Sylvie and Robert are Black, and Hollywood rarely made romantic movies on this scale featuring Black leads. You can count the number on one hand in major-studio films of the ’50s and 60’s or even early ’70s with a few like Claudine, Lady Sings the Blues, Mahogany, For Love of Ivy and Paris Blues. The latter two featured Sidney Poitier, who was almost the sole Black movie star to appear in films like this; in fact, Paris Blues initially was written to focus on the couple he and Diahann Carroll played but retooled to zero in more directly on the storyline between Paul Newman and Joanne Woodward. In this respect Sylvie’s Love manages to right the ship in retrospect, if only through the lens of filmmaking in 2020. Ashe also beautifully envelops the lovely period piece with a mixture of songs from the time, as well as new music written by Fabrice LeComte, giving it a real sense of the era along with a nice jazz rhythm throughout.

The relationship between Sylvie and Robert is played out almost like a fantasy since real- world intervention basically is non-existent — though one character is involved in Civil Rights discourse, and Sylvie’s later job on a TV show demonstrates the difficulties breaking through for people of color — and much of the film was shot on studio backlots including a scene where the pair slow dance on a street set with artificial light, as you might have seen frequently in films of the time. Their story endures the predictable bumps along the way as each deals with following their own dreams in the heightened Harlem/Bronx settings, but the theme of love mixed with art, music and old-style Hollywood glamour is strong even when they drift apart. Life goes on as time passes by and things change. Sylvie’s child, however, figures later in the film and becomes key in moving things to a satisfactory conclusion.

The film is dedicated to three icons of the era: Carroll, Nancy Wilson and Doris Day — all of whom died in the same year in which Ashe shot the movie — and their music figures here. Both actors are terrific, with Thompson sporting an Audrey Hepburn -style look at points and running through 50 costume changes. Asomugha, a former pro football player-turned-actor/producer, acquits himself nicely here and is especially believable in scenes where he plays the tenor sax. Declan Quinn’s sparkling cinematography hits the mark perfectly, as does the exquisite period production and costume design. Supporting cast, including Lance Reddick as Sylvie’s father, Eva Longoria, Wendy McLendon-Covey, Aja Naomi King, Erica Gimbel and others, are just fine, but the film belongs to its stars. And they come through to offer a bit of nostalgia for movie lovers but also a romantic drama that Hollywood too often ignored.

Producers are Ashe, Asomugha, Gabrielle Glore, Jonathan T. Baker, and Matthew Thurm. Amazon begins streaming the film on Christmas Day. Check out my video review with scenes from the movie at the link above.

Do you plan to see Sylvie’s Love? Let us know what you think.