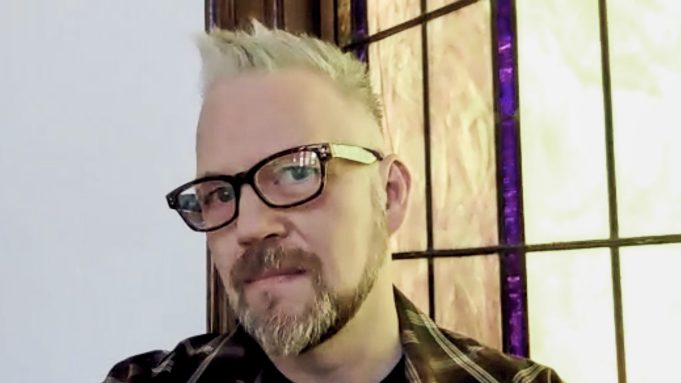 With Swan Song, Todd Stephens paid tribute to a muse from his childhood in Sandusky, Ohio who continues to inspire him to this day.

In conversation with the film’s stars Udo Kier and Linda Evans at Deadline’s virtual South by Southwest Studio, the writer/director offered insights into the life of one-time hairdresser Pat Pitsenbarger.

“When I was a little kid…I would see this wonderful, brightly dressed, elegant little man walking around downtown, who looked very different than everybody else,” Stephens recalled. “Back when I grew up, it was pretty conservative in Sandusky, and everybody kind of looked the same. But here was this guy that…wore a velvet fedora, and a feather boa, and smoked the long, brown More cigarette.”

Becoming “obsessed” with the mysterious Pat over the years, Stephens encountered him most closely at age 17, when we walked into local gay bar, The Universal Fruit and Nut Company, for the first time. “[When] I got up the nerve to go…I saw something sparkling and shimmering on the dance floor, and I turned, and there was the same man, wearing this outrageous pantsuit. It was Pat,” the director shared. “I like to say that he gave me the courage to be me, and be different, because I felt like I never fit in, either. So, he was kind of like my spirit animal.”

Unfortunately, Stephens never had the opportunity to get to know Pitsenbarger well. Not long after his aforementioned encounter, he relocated to New York. “But I always knew that I wanted to make a film about him,” he said—and so he did.

Also starring Jennifer Coolidge and Michael Urie, Stephens’ fourth feature picks up with Pat (Kier) at a point where he’s given up on life, as a retiree confined to a small-town nursing home. Subsequently, he’s called to style the final hairdo for his longtime client, Rita Parker Sloan (Evans), who has recently passed away, and he confronts the ghosts of his past, as he sets out on a remarkable journey through Sandusky.

Coming off of Bacurau and The Painted Bird—“two great films” in which he’d been tasked with playing “the evil guy”—Kier couldn’t have been approached with a more different kind of character than Pat. Naturally, then, he was immediately compelled by the script in front of him. “For me, it was kind of amazing. I like movies like that. I mean, sometimes, you also like movies where you have a trailer, and people guide you every moment, where you go,” the actor admitted. “But this film was a low-budget film, and everybody was very normal. I had a wonderful time with the actors.”

When Evans read the script for Swan Song, she too sensed the special nature of the project. “When I talked to Todd, it was a done deal. Because of his passion for this, I knew he was going to make this into a little jewel,” she said. “Todd wrote such a powerful script that had so much heart in it.”

Perhaps best known for her turn as Dynasty’s Krystle Carrington, which earned her a Golden Globe and five total nominations, Evans hadn’t acted much in the years leading up to this project, so there was a bit of hesitation about returning to the screen. But like Kier, she immediately fell in love with Stephens’ hometown, when she first ventured to it, which only added to the quality of her experience.

“You know, you hope that there are places like this in the world, where you show up and everyone’s real, and everyone cares. It’s like going back to the ’50s or something,” Evans said. “It was just real and lovely. I just automatically loved Sandusky.”

As Kier prepared for his portrayal of Pat, he kept in mind a motto he’d taken from his collaborations with Lars von Tier: “Don’t act.”

“So, I did not act. I was living it,” the actor shared. “While I was there, I became the person, [or] as close as I could get from the information.”

While mostly light and full of comedic moments, Swan Song did have a bittersweet concern at its center, for Stephens. Examining the experience of a character who is lost in a world he no longer recognizes, the film was conceived as a “love letter” to gay culture of the past that is rapidly disappearing in America.

The unfortunate realization Stephens has had in recent years is that, as the LGBTQ+ community has come to a place of more acceptance in society, the venues that once served as the only safe spaces for it continue to dwindle. “I felt, as a 17-year-old kid that was finding himself, that that [Universal Fruit and Nut] bar, and that community saved my life. Going there was like going home and meeting all-new family, so that was really major for me,” he said. “The interesting thing is that Pat’s generation built that bar, literally. To me, they built the gay community, and were my forefathers and foresisters… But now, a lot of gay bars, I think that the younger generation doesn’t need them as much.

“As it has been more acceptable to hold your boyfriend’s hand in McDonald’s, we don’t need the Fruit and Nut as much anymore, I guess,” the director added. “But do we? I was really trying to pose that question.”

Swan Song premieres at South by Southwest today at 10 a.m. PT. Check out our conversation with the pic’s director and stars above.