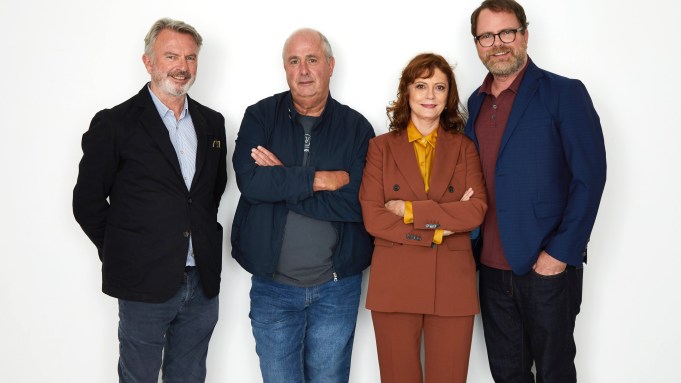 “What would you do if you knew that at a certain point, you’d become so dependent, and would have to watch this incredible deterioration?” In discussing playing Lily, a terminally ill woman with ALS in Roger Michell’s Blackbird, Susan Sarandon pondered her mortality at Deadline’s TIFF studio.

Sarandon was joined in the studio by Michell and Sam Neill, who plays her husband, and Rainn Wilson whose character is married to Lily’s daughter Jennifer (*Kate Winslet). The film tracks the family reunion as Lily gathers everyone together to face the facts of her imminent departure. Mia Wasikowska also stars as Lily’s other daughter Anna.

The cast were very tight-knit Neill explained, and worked together seamlessly. “It was like chamber music, in a way,” he said. “There were eight players, we all had very strong parts.” He also highly rated Sarandon’s performance. “I think Susan is going to get nominated for a million things,” he said. “Rainn and I make her look really good, but that’s the way ensemble things work.”

Although Blackbird is based on a 2014 Danish film Silent Heart, Michell decided not to watch it ahead of the shoot, despite hearing it was “a wonderful film”. But what he understood immediately was that what he was making was not about euthanasia at its core. Instead, it was “a very sophisticated portrait of a family, all taking place in one location,” he said, “almost like a sort of moving play, if you like, with only eight characters. It fascinated me that we could make a piece of proper cinema out of something that was so apparently limited, physically and geographically, and in fact, I think that’s what we’ve done.”

For Wilson, the shoot was challenging due to his home being threatened by the Malibu fires at the time. “I’m not exaggerating when I say, the day I was shooting my sex scene with Kate Winslet, literally as action is being called, I’m looking at an app on my phone that is showing the Malibu fires going right up my street—like, right over where my house is. So, it was very strange to be shooting a movie about death. It’s not really about death; it’s really much more about life and sex. And at the same time, it was very Chekhovian, you know? I was like, ‘Oh, my house might really be burning down, right at this very moment,’ and the fires missed my house by about a hundred feet.”

For more, check out the video clip above.