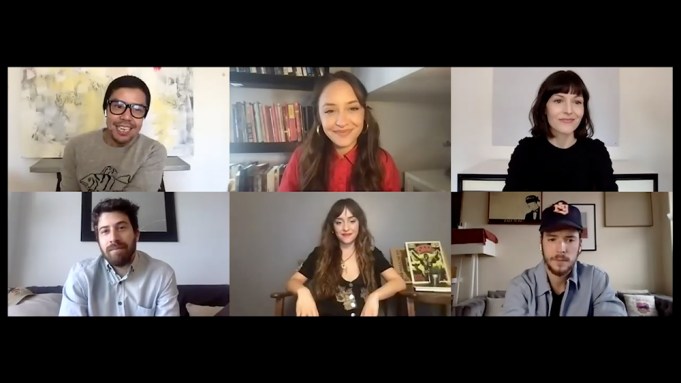 In 2015, Erin Vassilopoulos brought the short film Superior to Sundance. The short put the spotlight on the relationship of teen twins Marian and Vivian played by real-life twins Alessandra and Ani Mesa. Six years later, the twins have returned to the fest via Vassilopoulos’s directorial feature debut — also titled Superior.

Dripping in ’80s flair, the feature, which makes its world premiere in Sundance’s U.S. Dramatic Competition today, we revisit Marian and Vivian who are now adults. The De Palma-esque thriller finds Marian on the run. She has nowhere to go so she goes to her childhood home where her sister now lives.

Vivian could not be any more different than her nomadic musician sister. She’s a stay-at-home housewife struggling to conceive and on the verge of a failing marriage. Marian’s return disrupts Vivian’s small-town routine, and the sisters must learn to reconnect and reconcile but when Marian’s past finally catches up to her, their lives are put in danger.

Co-written by Vassilopoulos and Alessandra Mesa, Superior expands the world of the short. “We didn’t want to just turn the short into a feature,” said Vassilopoulos, who was joined in Deadline’s Sundance Studio by Alessandra & Ani Mesa and their co-stars Pico Alexander and Jake Hoffman. “The short is kind of a prologue.”

For the Mesa Twins, they used their own real-life relationship to inform their performances. Alessandra Mesa said that it was really fun to imagine where the twins from the short would be six years later. She added, “Our relationship is always gonna be there when we’re acting together which is kind of unavoidable in a good way.” She said that the characters are inverted and exaggerated versions of themselves. “It was a really an interesting challenge for us.”

Ani Mesa chimed in, “I was able to emp with my sister in a different way because I was able to get in her shoes.”