Continue to Deadline SKIP AD
You will be redirected back to your article in seconds
Skip to main content
November 25, 2020 9:00am 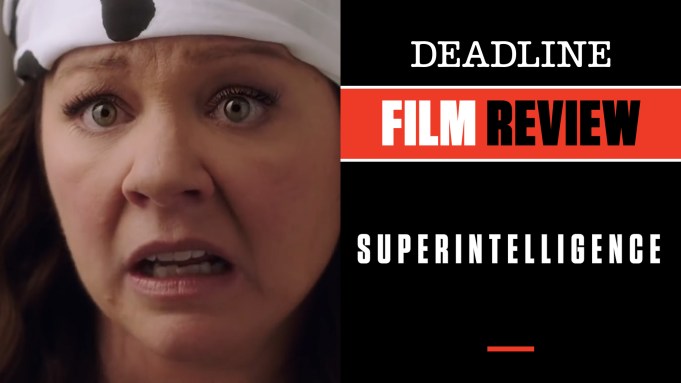 There is absolutely nothing wrong with the latest Melissa McCarthy-Ben Falcone comic creation, Superintelligence. In fact, it is a sweet little film, instantly forgettable but with a worthy message and also amusing in enough parts — I laughed at a few scenes — to justify a look on HBO Max. That’s where it is headed after a pre-Covid decision in which Warner Bros and the filmmakers opted that the New Line Cinema release is better suited for streaming than trying a run in theaters after the past three McCarthy-Falcone combined efforts (Tammy, The Boss, Life of the Party) landed without much of an impact. With the two-time Oscar-nominated star offering marquee value for the fledgling streaming service, it seems like the right move.

McCarthy is a damn good actress in the right vehicle, i.e., Can You Ever Forgive Me? or Bridesmaids or her go-for-broke presence in movies like Spy that made her a reliable box office name. Here she plays a character without much of an edge, though. It’s a part that doesn’t give her much room to really let loose. Carol is a goodhearted person who just wants to do something nice for the planet, even leaving behind her corporate job to do just that. Instead, her world is invaded by the AI superintelligence presence of a voice, eerily sounding like her favorite TV star James Corden.

Coming through in many of the digital devices that seem to run our world these days, this AI has chosen to impersonate Corden (played, of course, by Corden) in order to get close to Carol. In an ominous warning, he gives his chosen Earth person three days to make a case for humanity, and after that, he will choose either to save, enslave or destroy the human race. No pressure.

As she navigates the new reality of her life, Carol tries to convince him of the good in the world but also makes use of what limited time she — and we — might have left by revisiting a relationship with the guy who got away. Meeting cute, again, in a supermarket, Carol rekindles her romance with George (Bobby Cannavale), a guy who seems every bit as sweet and sincere as she is. You wonder if they were just too good for each other. Whatever the reason, the two stars are appealing enough for us to go along with it, even if it is a diversion to the main plotline.

This all happens as George is about to take off for Ireland for a year, so Carol makes the most of it. On another front, her BFF Dennis (Brian Tyree Henry) takes the situation with the superintelligence right to the top in his job, where he can engage the U.S. president (Jean Smart) and military in emergency efforts to stop AI aka Corden in his tracks. And then, thrown in for good measure is a cameo from none other than Ken Griffey Jr., when Carol takes George to a ballgame. Why not?

Screenwriter Steve Mallory came up with the lightweight concept, but the film never gets beneath the surface of the idea. That is why it is instantly disposable, the kind of movie you might enjoy thanks to top-flight actors but likely will not remember in the morning. Falcone casts himself in a small role while directing competently, but style is virtually non-existent. The filmmakers like to call this all “an apocalyptic love story,” but it really is just a minor concoction that is worth catching for McCarthy completists as we wait for the next great role this multi-talented star gets that is truly deserving of her talent, as well as a payday. Although it is a casting gimmick, and a one-note joke, Corden makes the most of his largely voice-over role in convincing fashion.

Rob Cowan produces along with McCarthy and Falcone. HBO Max offers it up beginning on Thanksgiving. Check out my video review with scenes from the film at the link above.

Do you plan to see Superintelligence? Let us know what you think.