Continue to Deadline SKIP AD
You will be redirected back to your article in seconds
Skip to main content
March 3, 2020 12:41pm 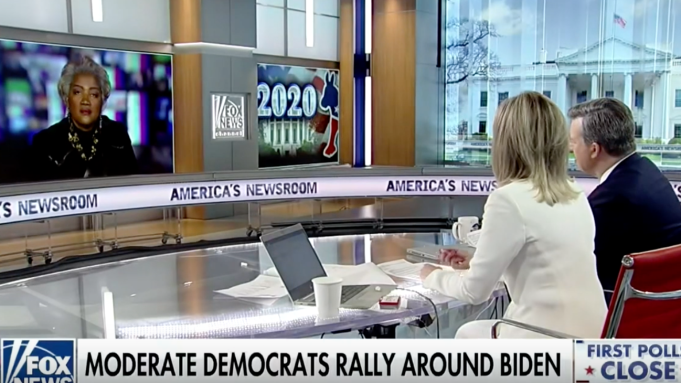 “For people to use Russian talking points to sow division among Americans, that is stupid,” former Democratic National Committee boss Donna Brazile lashed out at her GOP equivalent this Super Tuesday over claims that the system was “rigged” against Sen. Bernie Sanders, again.

“So Ronna, go to hell! This is not about — No, go to hell! I’m tired of it!” the Fox News Channel contributor proclaimed on the Rupert Murdoch-owned cabler newser to current Republican National Committee chief Ronna McDaniel.

As the video above makes crystal, it was a true political battle royale on FNC’s “America’s Newsroom” today as two Queens of the Beltway verbally belted it out as primary voting kicked into high gear across the nation in 14 separate states and territories.

“First of all, [Republicans] don’t have a process,” Al Gore 2000 campaign manager Brazile asserted. “They are canceling primaries. They have winner-take-all. They don’t have the kind of democracy that we see on the Democratic side.”

With Brazile having drawn a line in the sand with the GOP’s McDaniel, who is Sen. Mitt Romney’s daughter-in-law, over her earlier comments that all is not fair among the Democrats, the Donald Trump loyalist soon fired back on social media – and it wasn’t even a Sorry, Not Sorry:

I’d be having a bad day too if my party was still hopelessly divided.

Talk of a brokered convention and the DNC trying to stop Bernie obviously hit a little close to home.

Just now, Brazile herself took to Twitter to get the last word: “Seriously, I put this facts right out in broad daylight and you thought it was all darkness. No, I will tell you every day to stop using old, useless, flawed talking points created by the Russians to sos chaos and discord. @GOPChairwoman knows better.”

Also, not long after McDaniel first responded, Fox News’ own primetime host Laurie Ingram chimed in too with a further twist of the talking heads knife:

Brazile also said she’s “pissed” and that only Dems have the right to comment on the Dem race. @GOPChairwoman got the better of her and/or someone’s not happy about the state of her party. https://t.co/LwtRgf5sHj

Coming off a town hall last night with ex-NYC Mayor and big spending Democratic hopeful Michael Bloomberg, who has secured the Judge Judy vote for sure, FNC had no response to the party bosses dust-up when contact by Deadline.

Of course, in moves that remind many of the BTS of 2016, ringing endorsements from ex-candidates Beto O’Rourke, Sen. Amy Amy Klobuchar and Mayor Pete Buttieg came in for Joe Biden last night. With nothing yet from Bloomberg, the Democrats’ party establishment is otherwise clearly coalescing around former Vice-President in an effort to blunt the self admitted socialist Vermont Senator’s race to capture the nomination.

As former Celebrity Apprentice host Trump glides to his second nomination with the GOP, Brazile, who used to be a regular on CNN, took to the Catholic calendar to defuse the drama with McDaniels, kinda.

“It is Lent,” the Dem insider told FNC’s Sandra Smith and Ed Henry in response to McDaniels. “I’m trying to keep my karma, but stop lying about the Democratic process.”

With Bernie and Joe is a bare knuckle battle of their own for delegates, there’s going to be a lot more of that Democratic process even after tonight’s big votes.