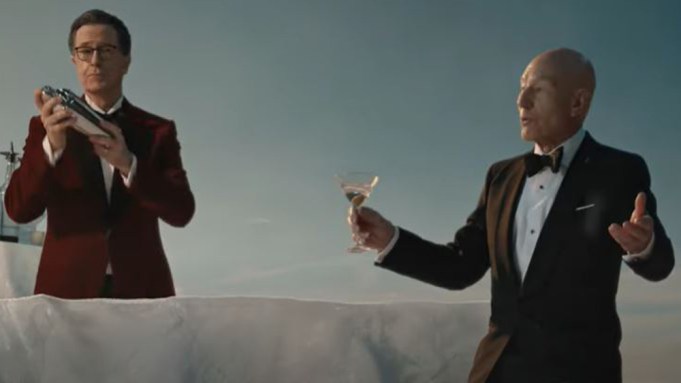 Journey with us now to Paramount Mountain, where Patrick Stewart captains the show, Stephen Colbert tends bar and a bunch of siblings from the ViacomCBS family dance like metaphors.

Yes, Paramount+ is getting in the Super Bowl ad game with a spot that introduces the streaming service soon-to-be-formerly known as CBS All Access. Have a look above at the extended 90-second spot above; a minute-long version will air Sunday.

Building on the streamer’s branding campaign that launched during the NFL’s conference championship weekend last month, the ad titled “Sweet Victory” gathers familiar faces from across channels, genres and generations. You’ll have to watch it to see — and ID — them all, but the gathering skips from comedy and drama to animation and kids shows to reality TV and the classics. There’s even a couple of old fartknockers, dillweed.

When a clearly fed-up Gayle King throws up her and hands and declares, “I’m going home,” a beaming Stewart admonishes, “Oh, silly goose, you are home — we live here now on Mount Paramount. Isn’t it glorious?”

That draws a veritable plethora of apathy and the inevitable question one would ask 29,150 feet above ground, “What are we supposed to do up here?” The Star Trek: Picard star replies, “We dance!”

Cue the classic SpongeBob SquarePants moment that gives the clip its name.

The clip will air Sunday during Super Bowl LV on, of course, CBS.