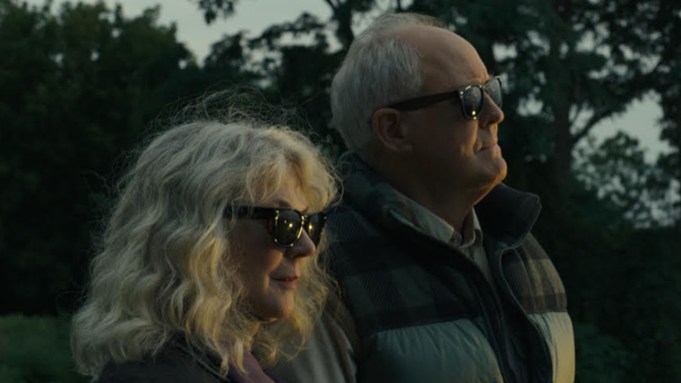 The Tomorrow Man reps the first time that acting legends John Lithgow and Blythe Danner have ever worked together, on-screen or even on-stage, despite the fact that both knew each other in New York City acting circles during the 1970s.

“Both of us were told the other was playing the part,” beamed Lithgow on why he jumped aboard Noble Jones’ feature directorial which the actor considered a classic girl meets boy story or in more precisely, “broken wings”.

Lithgow plays Ed Hemsler who spends his life preparing for a disaster that may never come. Danner is Ronnie Meisner who spends her life shopping for things she may never use. In a small town somewhere in America, the two try to find love while trying not to get lost in each other’s stuff. Jones drew inspiration for the story while travelling through the Dakotas.

The movie, which Bleecker Street acquired prior to Sundance, premieres tonight at 6:30PM MTN at the Eccles Theatre in Park City, Utah.

Watch our interview with Jones, Lithgow and Danner above.