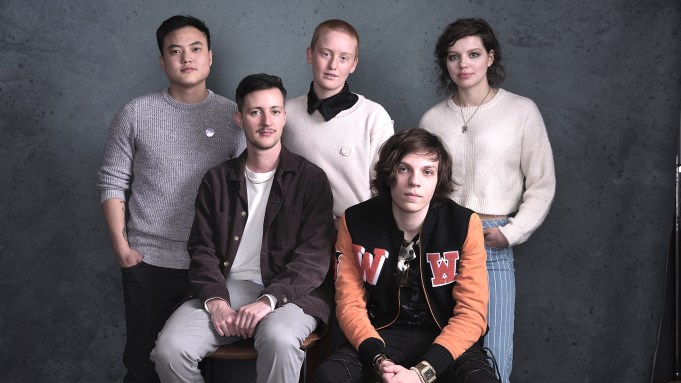 Known as a producer on Transparent and a series of shorts—“a lot of stuff that had to do with trans identity”—Rhys Ernst had checked off a lot of creative boxes before making his feature debut with Adam, which came to him out of left field. Based on a book by Ariel Schrag, who wrote the script, the satirical feature follows Adam (Nicholas Alexander), an awkward teenager spending his last high school summer with big sister Casey (Margaret Qualley). Thrown headfirst into New York City’s lesbian and trans activist scene, Adam’s sexual identity is mistaken, and a comedy of errors ensues.

“I got this script in my inbox in 2017 from James Schamus and Howard Gertler, and I had no idea what to expect. I didn’t really know how I was going to respond to it, but it kind of blew me away,” Ernst told Deadline in Sundance. “It was such a radical approach, this sort of mistaken identity genre that we’ve seen over and over again, from Twelfth Night to Yentl and Tootsie. It was kind of this crazy inverse of it, that made the queer and trans world accessible for people who didn’t know anything about it.” At the same time, Ernst sought an “authentic” portrait of  he LGBTQ+ community, with the hope that it would resonate with these individuals, as well.

Sensing the potential to make a “broadly appealing” comedy with Adam, the director knew this was a film that should only be handled by those who knew the community well. As a gifted artist who happens to be trans, Ernst knew how to tackle the film’s “comedic tone,” while presenting an experience that could “bridge the gap, and invite outsiders to the table, as well as queer and trans people.”

For the cast present at Deadline’s Sundance Studio, including Alexander,Bobbi Salvör Menuez, Leo Sheng and Chloe Levine, there was a general consensus on the qualities of Adam that made it compelling. Presenting a singular voice, the script was funny, engaging and utterly unique. As Levine said, most films featuring the trans community to date have approached it from a tragic place, so seeing a comedy centered on this world was a breath of fresh air.

“I think queer and trans people, [as] underrepresented people, are really eager to see themselves depicted on screen, but I think that there’s also a desire to poke fun at things, and have some levity,” Ernst said. “It doesn’t have to be always serious, all the time.”

Menuez expanded on her director’s comments in this vein, explaining the power in comedy itself. “Once you get an audience laughing, you bring them into this space of vulnerability, where they’re actually connecting to all these different characters, who come from these really different experiences,” Menuez said. “Something about it being a comedy, and that not always being the way that we hear or receive these stories, I think is a really exciting avenue to create an opportunity to connect.”

In conversation with Deadline, Ernst also discussed the future of queer cinema, and what he hopes to see in the years to come. “There’s a lot of room for all different kinds of genres, and I’d love to see more queer horror.  There’s a lot of different avenues we could go down, and I don’t think it has to be niche at all,” he reflected. “I think Adam is a perfect example of that; I really am excited to see a wide audience take this movie in, and have all these kinds of conversations that come out of it.”

For more from our conversation with the Adam team, take a look above.