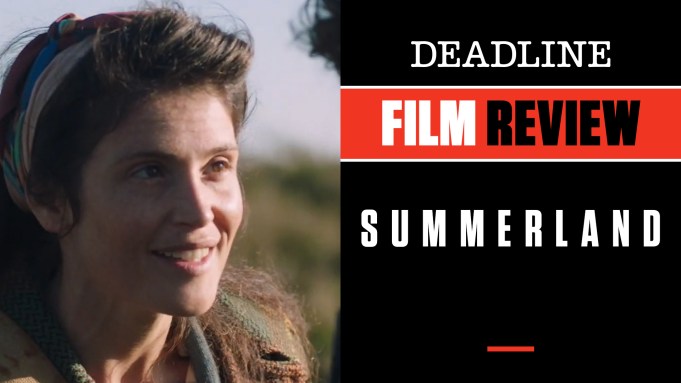 For my money, the new movie Summerland could not have come at a better time. Cast to perfection, beautifully shot, and marking a lovely feature directorial debut for Jessica Swale, this is not only a respite from these COVID-distressed times, it’s a story that resonates.

Set during another stressful period in human history, World War II, and also dealing with characters experiencing their own brand of isolation and need for human connection, Summerland is one of those deceptive British gems that ultimately defines what a feel-good movie can be — one that is familiar to us but, coming in the summer of our discontent, so very welcome.

Gemma Arterton, also a producer on the film, plays Alice, a reclusive writer living alone in a picaresque slice of coastal Southern England (it was shot on gorgeous locations in East Sussex). She’s a woman who lives by her own rules and almost bohemian style (some of the local kids think she’s a witch) who finds her life upended when Frank (Lucas Bond), a young boy who is a London evacuee during the war, comes to live with her.

At first disconcerting, this determined loner eventually finds his company a life-energizing force where the horrors of WWII play a distant role in this idyllic setting where normalcy tries to prevail. Along the way we meet others including Frank’s feisty schoolmate, Edie (Dixie Egerickx); the school principal, Mr. Sullivan (veteran Tom Courtenay); and, most tellingly in richly developed flashbacks to a very different time, her old friend Vera (Gugu Mbatha-Raw). All come into focus as Alice’s life — then and now and eventually later — is revealed in a time span that jumps from the 1920s to the ’70s.

Mostly, however, it is about what happens during that wartime summer, but importantly bookended by events before and after that might have slipped into melodrama but never do thanks to Swale’s loving script and assured direction. A lesser filmmaker might have fallen prey to twists that seemed a little too convenient but as developed here play out naturally, and never telegraphed. All you need to know is how important love is as the connecting tissue at hand.

Arterton is simply magical here, much like the mythical place from which the film takes its title. She has a perfect beat on the role, taking in Frank reluctantly and believably maturing as a nurturing force in the life of a boy who clearly one day will be able to look back on this time and forever be changed because of it. He is brought to vivid life by Bond, an exceptional young actor, in an expressive and naturalistic performance of someone who finds himself believing in the mythical Camelot-like Summerand as his own escape and worry about his pilot father off fighting in the real world as his mother works during the Blitz.

Egerickx is a real live wire as Edie, and Courtenay is, and always has been, an acting treasure. Penelope Wilton opens and closes the movie as the older Alice, completely credible in the role we come to associate with the younger version of Arterton, who plays her from the 1920s thru the ’40s. Mbatha-Raw is luminous as Vera, and their sensuous relationship is touchingly realized, forging a deep connection that ultimately leads to surprising and satisfying places.

Swale doesn’t shy from sentimentality in this tale but doesn’t bask in it — instead wanting to deliver a movie that offers hope and humanity in equal doses. With the help of an impressive group of actors, she fully delivers on it. IFC releases the film Friday on VOD. Producers are Guy Heeley and Adrian Sturges. Check out my video review at the link above with scenes from the film.

Do you plan to see Summerland? Let us know what you think.